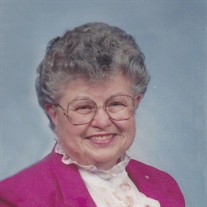 Wilma Edith Sutton, 91, of McPherson and formerly of Beatrice, NE, passed away peacefully on Tuesday, March 3, 2015, at The Cedars, McPherson. She had worked as a bookkeeper for Frantz Farm Equipment in Beatrice, NE.

Wilma was born on November 11, 1923, in Holmesville, NE, the daughter of Alfred N. and Kathryn (Burkholder) Frantz. She graduated from Beatrice High School in 1941 and attended Lincoln School of Commerce in Lincoln, NE. On April 5, 1947, Wilma was united in marriage to Charlie C. Sutton in Elgin, IL. He preceded her in death on May 24, 2012.

She was a member of McPherson Church of the Brethren.

She was preceded in death by her parents, husband, brother, Elmer Frantz, and sister, Lucile Coyle.

A memorial service will be held on Sunday, March 15, 2015, immediately following regular Sunday service at McPherson Church of the Brethren with Rev. Chris Whitacre officiating.

Memorial donations may be given to the McPherson Church of the Brethren in care of Stockham Family Funeral Home, 205 North Chestnut, McPherson, KS 67460. To send flowers or a memorial gift to the family of Wilma E. Sutton please visit our Sympathy Store.

To send flowers to the family in memory of Wilma E. Sutton, please visit our flower store.
Send a Sympathy Card