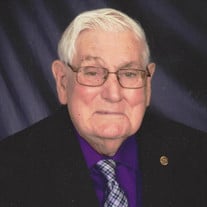 William “Bud” Ellsworth Starr, 92, of McPherson, KS, passed away peacefully on Sunday, August 11, 2019, at McPherson Health & Rehab. He was a truck driver for Kansas Transport from 1955 to 1970 and worked for McPherson Concrete where he was the Redi-Mix plant operator. After retirement, he delivered flowers and medicine for Dillons.

Bud was born on March 19, 1927, in Nevada, MO, the son of Ulysses Earl and Nellie Leta (Kennedy) Starr. He went to school in Clyde, KS and did correspondence classes through American High School, where he graduated 12th grade.

On November 27, 1949, Bud was united in marriage to Mildred “Millie” J. Meyer in Washington, Kansas. This union was blessed with three children, Susan, Lyle, and Connie.

He was preceded in death by his parents and sister, Wilma Monty.

The family will receive friends from 5:00 PM to 7:00 PM, Thursday, August 22, 2019, at Stockham Family Funeral Home. The funeral service will be held at 10:00 AM, Friday, August 23, at First Baptist Church with Pastor John Pattison officiating. Burial with Military Honors will follow the service at McPherson Cemetery.

Memorial donations may be given to Meals on Wheels or First Baptist Church in care of Stockham Family Funeral Home, 205 North Chestnut, McPherson, KS 67460. To send flowers or a memorial gift to the family of William E. Starr please visit our Sympathy Store.

To send flowers to the family in memory of William E. Starr, please visit our flower store.
Send a Sympathy Card