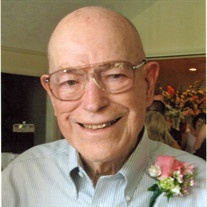 The best Dad ever went to join the love of his life on March 16, 2015. William R. "Bill" Leonard was born on July 25, 1922, to Andrew S. and Nannie (Bloomer) Leonard in Arcadia, KS. He grew up around Pawnee Station and graduated from Fort Scott High School. He met the aforementioned "love of his life" on May 19, 1940, on the second cow pile of Pawnee Station Baseball field in Harry Dunn's cow pasture.

Bill was a radio operator for "A" Troop, 89th Reconnaissance Squadron, 9th Armored Division. After the war, he co-owned a service station in Fort Scott with a good friend. He came to McPherson in 1949 on the G.I. bill to work for Caliendo Motors. He worked for the Ford dealership in McPherson for many years as a mechanic. Later he worked in maintenance for Johns Manville until retirement.

Bill was a member of the First Presbyterian Church, Elks Lodge, Masonic Lodge, and Eastern Star, all of McPherson.

He was preceded in death by his parents, wife, brothers, John and Floyd, sisters, Wilma, Bertha, and Martha Jane, his son, John, and his son-in-law, Hadley.

The graveside service with Military Honors will be at 10:30 AM, Saturday, May 9, 2015, at Pleasant Valley Sheffield Cemetery in Arcadia, KS.

The family suggests memorial donations be given to the American Diabetes Association or the Lyons Good Samaritan Center in care of Stockham Family Funeral Home, 205 North Chestnut, McPherson, KS 67460. To send flowers or a memorial gift to the family of William R. Leonard please visit our Sympathy Store.

To send flowers to the family in memory of William R. Leonard, please visit our flower store.
Send a Sympathy Card