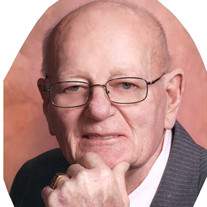 William A. “Bud” Besecker. 86, of McPherson, passed away Tuesday, April 15, 2014, at McPherson Memorial Hospital surrounded by his family. He was a farmer and also worked for the NCRA Refinery for 43 years.

Bud was born August 4, 1927, in McPherson, the son of Henry A. and Selma (Hanson) Besecker. He attended school through the 10th grade and left to enlist in the U.S. Army Air Corps, serving during World War II aboard a B-29 Superfortress in the Philippines.

On June 17, 1948, Bud was united in marriage to Pearl L. Winter at the Trinity Lutheran Church in McPherson. They spent their entire married life in McPherson County, living in the towns of Roxbury, Canton, Windom, and McPherson.

Bud was a member of Trinity Lutheran Church and was a Life Member of McPherson VFW Post #2715 and Canton American Legion Post #192.

The funeral service will be at 2:00 PM Saturday, April 19, 2014, at Trinity Lutheran Church, with Rev. Tim Leaf officiating. Burial with military honors will be at Crestwood Memorial Park, McPherson. Visitation will be from 3:00 to 8:00 PM Friday at Stockham Family Funeral Home, with the family receiving friends from 6:00 to 8:00 PM.

In lieu of flowers, memorial donations may be given to the War and Peace Quilters or Hospice and Homecare of Reno County, in care of Stockham Family Funeral Home, 205 N. Chestnut, McPherson, KS 67460. To send flowers or a memorial gift to the family of William A. "Bud" Besecker please visit our Sympathy Store.

To send flowers to the family in memory of William A. "Bud" Besecker, please visit our flower store.