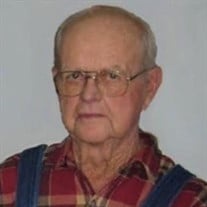 Bill was born on February 21, 1930, at Asbury Hospital in Salina, KS to Ross and Nettie Anderson. He passed away following a brief illness, surrounded by his family, in the same hospital.

Bill graduated from Roxbury High School in 1948, attended McPherson College, and then was drafted into the army and served two years as an industrial arts teacher at Fort Leonard Wood, MO. With his father disabled by polio, he started farming at a very young age and continued working the family farm alongside his elder son and grandsons until a short time before his death. He also worked 37 years at the National Cooperative Refinery Association in McPherson, KS, before retiring.

He loved woodworking, metal working, and machinery repair. While soft-spoken, he was well known for a fast, wry wit, and an extraordinarily kind spirit.

His great love was for his family. In addition to his wife and sons, he was blessed with two grandsons, Scott and Shawn, both of Roxbury, KS, whom he mentored as children and who repaid him with years of love, respect, and care.

Bill was preceded in death by his parents, his brothers, Bobby, Don, and Daryl, and his sister, Betty Hutchins.

Because of the challenges of the times, the immediate family will have a graveside memorial service. Donations in his memory may be made to the Roxbury United Parish, Roxbury, KS, or to a memorial fund to be set up in his memory for maintenance of The Valley View Memorial Cemetery in Roxbury, KS in care of Stockham Family Funeral Home, 205 North Chestnut, McPherson, KS 67460. To send flowers or a memorial gift to the family of William B. Anderson please visit our Sympathy Store.

To send flowers to the family in memory of William B. Anderson, please visit our flower store.