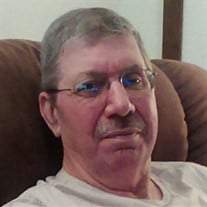 Throughout his life, Bill lived and worked in several central Kansas communities, most recently McPherson, retiring from Hutchinson Correctional Facility in 2005. Bill was a great music and poetry wordsmith, and in his own words an “okay” guitar player. He was also an avid fisherman.

Funeral mass will be 10:00 am Saturday, December 16th, at Our Lady of Guadalupe Church in South Hutchinson, with Father Ned Blick officiating. The family invites everyone to gather immediately following the service at Anchor Inn Restaurant in Hutchinson for a self-pay meal. Bring your stories, pictures and mementos of Bill to share as we celebrate his life.

Inurnment will take place at a later time in the family plot in Geneseo, Ks. Memorial contributions may be given to the McPherson County Food Bank in care of Stockham Family Funeral Home, 205 N. Chestnut, McPherson, Kansas 67460. To send flowers or a memorial gift to the family of William O. Adams please visit our Sympathy Store.

To send flowers to the family in memory of William O. Adams, please visit our flower store.