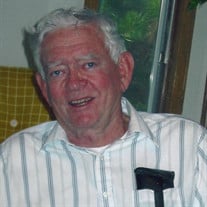 To view a live-stream broadcast of the memorial service on Saturday, May 2, at 3:00 PM, click on this link: https://boxcast.tv/channel/hjhn8rpfouds5e2r37gk

Wilbert Dean Born, 91, of McPherson, KS, went home to be with his Lord and Savior on Sunday, April 26, 2020, surrounded by family members at The Cedars Health Care Center, McPherson. He owned and operated Tidy Laundry.

Wilbert was born on February 24, 1929, in Emporia, KS, the son of John E. and Lizzie Ellen (McCandles) Born. He graduated from high school in Lebo, Kansas. Wilbert was united in marriage to Barbara Dean Kitts, and they were blessed with three children, Jeffrey, Michael, and Janet. On April 20, 1996, Wilbert was married to Marie (Tetrick) Graves in McPherson. She preceded him in death on August 17, 2016.

He was a member of Grace Bible Church, McPherson.

A private funeral service will be held at 3:00 PM, on Saturday, May 2, 2020, at Stockham Family Funeral Home with Pastor Rich Duerksen officiating. A live-stream broadcast of the service will be available by clicking on the following link: https://boxcast.tv/channel/hjhn8rpfouds5e2r37gk

Memorial donations may be given to Grace Mission, Inc. for the benefit of children of Haiti in care of Stockham Family Funeral Home, 205 North Chestnut, McPherson, KS 67460.

Additional information written by Wilbert's family for the funeral folder:

Wilbert Dean Born was born on February 24, 1929 in Emporia, Kansas. Wilbert grew up in Lebo, Kansas, with his father and mother, John Edgar and Lizzie Ellen Born and older brother, John E. On good weather days, Wilbert and his brother would ride a pony to the one-room schoolhouse. On other days their mother drove them in a 1928 Chevrolet.

After graduating high school, Wilbert tried farming, following in his father’s footsteps. However, his entrepreneurial spirit led him to try his hand as a business owner, starting a coin-operated laundry & dry cleaning business in McPherson, KS. Wilbert owned that original laundry, Tidy Laundry, for more than fifty years and expanded the business to include at least seven more laundromats as well as a route with two-hundred pieces of equipment located in apartment buildings and colleges throughout Kansas, with one location in Colorado. His business operations also included, at various times, a car wash, storage units, residential rental properties, a mobile home park, appliance repair and a real estate business.

But work was not everything to Wilbert. He typified the modern ad slogan “work hard and play harder.” He loved to travel. One of his favorite destinations was Colorado. But he also took his family on long summer vacations all over the United States and even into Mexico and Canada. He also loved riding motorcycles, driving boats and he even tried hang gliding. In his younger days, Wilbert raced cars and was known by most of the local constabulary for his tendency to violate the speed limit, which was only limited to “safe and reasonable.”

Wilbert was also deeply spiritual, having found his salvation in the Lord Jesus Christ. He was a long-time member of Grace Bible Church in McPherson where he served as the head usher and the church bus driver. However, he did not just talk about Christian principles of charity and love, he lived them. He was passionately involved in Grace Mission, a charitable organization dedicated to helping underprivileged children and families in Haiti. Wilbert made twelve trips to that impoverished country, where he was known as the handyman who could repair anything. He helped primarily with the Drop of Love School, providing hope and love to those less fortunate.

Wilbert married Barbara Dean Kitts in 1958 and they were blessed with three children, Jeffrey, Michael and Janet, who currently reside in McPherson, Olathe and Ft. Worth respectively. In 1996 he married Ella Marie Graves and they enjoyed twenty years together before Marie’s passing in 2016.

Wilbert went home to be with his Lord and Savior on Sunday, April 26, 2020, surrounded by family members at The Cedars in McPherson. He is survived by his brother, his three children and his four grandchildren, Riley Born, Renee Born, Jessica Johnson and Jeremy Johnson.

Wilbert told all his family and friends that, when he died, we should not mourn his passing, as he will be with God, but that we should celebrate his life. To send flowers or a memorial gift to the family of Wilbert D. Born please visit our Sympathy Store.

To send flowers to the family in memory of Wilbert D. Born, please visit our flower store.
Send a Sympathy Card