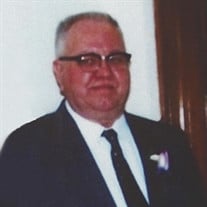 Wayne was born on April 23, 1931, in McPherson, KS, the son of John Verner and Helen Mary Charlotte (Strom) Logbeck. He graduated from McPherson High School in 1949. Wayne served in the United States Air Force during the Korean War from 1949 to 1955. On March 8, 1991, Wayne was united in marriage to Mavis Gene (Hurtt) Wagner in Hutchinson, KS.

He was preceded in by his parents and sister, Sally Pattengill.

Memorial donations may be given to New Gottland Lutheran Church in care of Stockham Family Funeral Home, 205 North Chestnut, McPherson, KS 67460. To send flowers or a memorial gift to the family of Wayne R. Logbeck please visit our Sympathy Store.

To send flowers to the family in memory of Wayne R. Logbeck, please visit our flower store.
Send a Sympathy Card