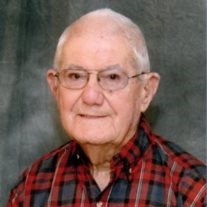 Wayne Baldwin, 97, of McPherson and formerly of Galva, passed away peacefully on Monday, March 31, 2014, at The Cedars, McPherson. He had owned and operated Home Telephone Company, Galva. He was a veteran of the Army Air Corps, serving during WWII.

He was born on January 26, 1917, in Fort Wayne, Indiana, the son of Miles Edward and Blanche (Lewis) Baldwin. He graduated from Galva High School in 1935.

He was a member of Galva Christian Church and the American Legion Post #24.

Survivors include: son, Robert (Cindy) Baldwin of Galva, KS and their children & grandchildren; Carla (John) Shearer and Kaycie and Johnny; Tina (Bryan) Anderson and Katie (with one great-granddaughter in May), Justin, and Jason; Richard (Carisa) Baldwin and Bryant and Mikayla; daughter, Nancy (Ron) Flaherty of McPherson, KS and their children & grandchildren; Monja (Todd) Kiefer and Kai, Jordan, Savannah, and Madison; Heather (Joe) Silhan and Paige, Easton, Emily, and Mikey; Chris (Christy) Flaherty and Brody; and daughter & grandchildren of the late Lynn Baldwin; Stacey (Mark) Nyquist and Nate and Macy.

He was preceded in death by his parents, wife, son, Lynn Baldwin, brothers, Dean Baldwin and Dick Baldwin, and sister, Betty Carlson.

The funeral service will be held at 10:30 AM, Saturday, April 5, 2014, at Galva Christian Church with Pastor Tripp Edwards officiating. Private burial with Military Honors will precede the service at the Empire Cemetery, Galva. Visitation will be held from 4:00 PM to 7:00 PM, Friday, April 4, at Stockham Family Funeral Home with the family receiving friends from 5:00 PM to 7:00 PM.

Memorial donations may be given to Galva Christian Church , Christ Kids Daycare Center, or the Lynn Baldwin Memorial Park in care of Stockham Family Funeral Home, 205 North Chestnut, McPherson, KS 67460. To send flowers or a memorial gift to the family of Wayne Baldwin please visit our Sympathy Store.

To send flowers to the family in memory of Wayne Baldwin, please visit our flower store.