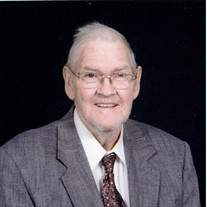 Bacon, Wallace, B., Chief Warrant Officer, Kansas Army National Guard Retired, passed away on August 14, 2014, at age 85. Services will be held Wednesday, August 20 at 10:00 AM at the Schowalter Villa Chapel, 200 W. Cedar, Hesston. A graveside service with Military Honors will follow at the McPherson City Cemetery. Wallace was preceded in death by his wife, Marie on June 10, 2014, his parents, Cal and Ada Bacon, brother, Vearl, and sister, Velma Unruh. He is survived by his son, Todd Bacon and his wife Barb of Wichita, his three grandchildren, Paige Bacon of Seattle, Brooke Cheney and her husband, Ryan and daughter, Olivia of Wichita, Alex Bacon of Wichita, his sister, Arlene Sloop of Shell Knob, Missouri, and many nieces and nephews. Wallace was born on October 19, 1928 and grew up in McPherson. He married Marie Hedges in 1947 and they built a life together with their son, Todd. In 1948, Wallace enlisted in Company A, First Battalion, 137th Infantry Regiment, 35th Infantry Division, Kansas Army National Guard, McPherson, KS. In 1954, he transferred to Company C, First Battalion, 137th Infantry Regiment, 35th Infantry Division, Newton. He served in active duty in Vietnam from 1968-69 with the 222nd Aviation Battalion, and upon his return, he was assigned to various duty stations throughout Kansas. In 1988, Wallace retired from the Kansas National Guard as the Brigade Property Book Officer, CWO-4, 169th Support Battalion, 69th Infantry Brigade.

During retirement in Newton, Wallace volunteered in many organizations which included the American Red Cross, Lions Club, Meals on Wheels and Caring Hands Humane Society. He was a member of Trinity Heights United Methodist Church, and a lifetime member of the American Legion Post 2 and the Veterans of Foreign Wars Post 971. Wallace spent the last five years of his life at Showalter Villa in Hesston. Wallace’s family would like to offer their heartfelt thanks to everyone who offered him loving and compassionate care throughout his last days. Memorials have been established with Schowalter Villa, Hesston; Harry Hynes Hospice, Wichita; and the Museum of the Kansas National Guard, Topeka in care of Stockham Family Funeral Home. To send flowers or a memorial gift to the family of Wallace B. Bacon please visit our Sympathy Store.

To send flowers to the family in memory of Wallace B. Bacon, please visit our flower store.