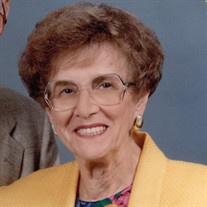 Virginia Rose Prickett McClain, 92, daughter of Gustaf and Hulda Josephine (Anderson) Johnson, was born on September 28, 1921, and passed away at The Cedars, McPherson, on Tuesday, July 15, 2014.

Virginia was born on the family farmstead three miles south of Lindsborg. In 1934, she was brought to the Lord in Holy Baptism at the First Baptist Church, Lindsborg, and later in 1947, became a member of First United Methodist Church, McPherson.Virginia attended the Smoky Hill School District 105 and later graduated from Lindsborg High School in 1939. On January 20, 1943, she was united in marriage to Marion Oren Prickett at Yuma, Arizona while Marion was stationed at San Luis Obispo, California. To this union, two sons were born, James and Steven.

Along with being a homemaker, Virginia worked as a dental assistant for Dr. Reed in Lindsborg while Marion was stationed overseas. Years later, she was a Luzier cosmetics consultant for 40 years. After losing her husband to a heart attack in 1974, she was persuaded by Cedars Administrator, LeRoy Weddle to come to work for the rest home. While employed there, she obtained her Certified Medication Aide designation. Virginia enjoyed her 12 years working with The Cedars residents. On June 10, 1988, Virginia married her neighbor, Herbert O. McClain. They later divorced in 1999 and remained good friends.

The funeral service will be at 10:00 AM, Thursday, July 17, 2014, at Stockham Family Funeral Home. The family will receive friends prior to the service, starting at 9:00 AM at the funeral home. Burial will follow the service at Elmwood Cemetery, Lindsborg.

Memorial donations may be given to Meals on Wheels in care of Stockham Family Funeral Home, 205 North Chestnut, McPherson, KS 67460. To send flowers or a memorial gift to the family of Virginia R. Prickett McClain please visit our Sympathy Store.

To send flowers to the family in memory of Virginia R. Prickett McClain, please visit our flower store.