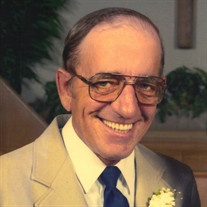 Vernon R. “Vern” Koch, 70, of McPherson, passed away peacefully on Friday, June 6, 2014, at his home in McPherson. He was retired after 35 years from the State Highway Dept. (KDOT) as a supervisor.

Vern served in the U.S. Army during the Vietnam War, attaining the rank of Sergeant. He was a life member of the McPherson V.F.W. #2715.

He was preceded in death by his parents, wife, four brothers, Henry, Harold, Jake, and Leo; sister, Doris Cherry; and two of the best dogs that ever lived, Brutus and Suzy.

The graveside service will be held at 10:00 AM, Thursday, June 12, at McPherson Cemetery. There will be no visitation.

Memorial contributions may be given to the McPherson County Humane Society in care of Stockham Family Funeral Home, 205 North Chestnut, McPherson, KS 67460. To send flowers or a memorial gift to the family of Vernon R. Koch please visit our Sympathy Store.

To send flowers to the family in memory of Vernon R. Koch, please visit our flower store.