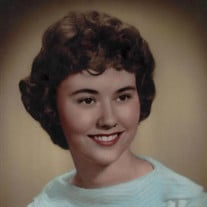 Verna was born July 28, 1945, the daughter of Earl and Ethel (Blomberg) Alger. Her father, Earl, passed away when she was an infant. Her mother married Earl Boggs when Verna was in the 4th grade, and they moved to the farm west of Marquette where she grew up. She attended school in Marquette from 4th grade on, graduated in 1963. Verna went on to Brown Mackie. Upon completion of her schooling, she worked for a time as a bookkeeper for a business in McPherson. She met and married Michael Graham, and they moved to Illinois where he worked for the railroad as a station manager. Two children were born to this union, a son, Todd Graham, and a daughter, Andrea (Graham) Willems. After 12 years of living in Illinois, Verna moved back to Marquette following the death of her husband, Michael, in 1976. Several years after returning to Kansas, Verna met and married Ronald Phillips. This union lasted for 20 years, at which time Ron died from ALS in 2001. Four years later, she married Alan James on December 30, 2005.

Verna was a multi-talented woman. She was church secretary for Elim Lutheran Church in Marquette for 20 years, a talented marketer on e-Bay and at flea markets. She was not only an excellent cook, but often grew what she served whether it be chickens or garden produce. The secret to her recipes would be that she added her own touch to whatever she cooked, so, yours might not taste as great as hers. She was an excellent driver, whether it be the lawn mower or the semi. She also was a super seamstress and could patch or sew from scratch. Verna loved to travel and enjoyed seeing the country. She was a devoted mother and wife.

She leaves behind: husband, Alan; son, Todd (Brenda); a daughter, Andi; 13 grandchildren; and three great-grandchildren, all of whom will sorely miss her.

In lieu of flowers, memorial donations may be given to Freemount Lutheran Church Memorial Fund or Kindred Hospice in care of Stockham Family Funeral Home, 205 North Chestnut, McPherson, KS 67460. To send flowers or a memorial gift to the family of Verna E. James please visit our Sympathy Store.

To send flowers to the family in memory of Verna E. James, please visit our flower store.
Send a Sympathy Card