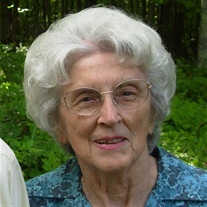 Verda Grove was born in Monroe Country, Iowa in 1918 as the first child of Sarah Bruere, from an Iowa Church of the Brethren family, and Earl Grove of the Shenandoah Valley in Virginia, also from a Church of the Brethren family. After high school, Verda was determined to attend college and worked to save money to go to McPherson, where she graduated in home economics in 1940.

On Valentine’s Day in 1942, Verda married Wesley DeCoursey, of Nampa, Idaho, also from a Church of the Brethren family. The war had a large effect on their early married years. When Wes was drafted in 1944 as a conscientious objector, they chose to do alternative service at Waldport, Oregon, and later near Washington DC. In spite of living at poverty level, these years offered them enriching experiences, and life-long friendships.

Verda enjoyed living in McPherson, where they moved in 1952 to accept teaching positions at the college. There was scope for many of her wide-ranging interests; she taught design courses at the college, helped set up the McPherson Arts Council, chaired the church board and American Association of University Women, was president of McPherson County Democratic Women’s Club, and was active in a peace group, a child study group, and later a gardening club and the Gem and Mineral Club. The distinctive blue color she chose for their turn-of-the-century house on East Euclid, along with the beautiful flowerbeds she created around the house, drew the admiration of passersby.

A landmark experience was spending a sabbatical year in Karachi, Pakistan, and Tehran, Iran. The foreign sojourn and the way there and back turned the whole DeCoursey family into international travelers, altering their perspective on world affairs and other cultures.

Retirement years saw Verda and Wes spending 33 summers “up at the cabin” near Lake Superior, where they worked hard (maintaining the property as well as building a new cabin Verda designed) and played hard (making wooden craft items of Verda’s design), interspersed with socializing with the Ikenberrys, the Burkholders, and the Florys, who had cabins down the road. They made their last 1,000-mile trip to the cabin at age 90.

Verda was converted to the Internet when she discovered she could see daily charts of the performance of the stock market. Her willingness to learn to use the computer for emailing greatly enriched communication with her far-flung children and grandchildren.

On May 18, at the age of 96, Verda died peacefully in the hospital after spending three days surrounded by family. In 2004, Verda and Wes had moved to the Cedars Village. She is survived by her husband Wesley; her three sisters, Pauline Flory of Waterloo, Iowa, Dorothy Peterson of Monroe, Georgia, and Harriette Janke of Manhattan, Kansas; her three children, Rita from Leiden, the Netherlands, Thomas from Oak Park, Illinois, and Dora from Portland, Oregon; four grandchildren, Karin, Audrey, Eric and Jill; and two great-grandchildren, Ryan and Julian.

To send flowers to the family in memory of Verda Ione DeCoursey, please visit our flower store.
Send a Sympathy Card