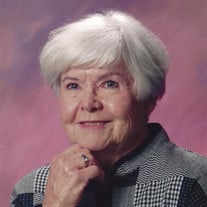 Velvia Viola Pearman, 89, of McPherson, KS, died at her home on July 23, 2017. She was born in Allen County Kansas on October 5, 1927, the fourth child of Raymond Uriah and Bertha Viola (Colgin) Jackson.

She was raised around the Bourbon County, Kansas area with her parents, brothers, and sisters. She graduated from Moran High School in 1944. She attended Pittsburg State Teachers College and got an emergency teaching certificate so she could teach at several country schools in Bourbon County, Kansas during World War II.

While working at the dress factory in Iola, Velvia met and married Russell Leavell Pearman on October 21, 1947, at the Allen County courthouse in Iola, KS and honeymooned in Chanute. While Russell attended Iola Junior College, Velvia worked at Kresge’s Dime Store and later the Iola Hallmark Card Factory. They lived above the meat locker in downtown Iola and loved eating hamburgers and ice cream. When Russell graduated, they moved to Emporia so he could attend Emporia Kansas State Teachers College. She transferred her job with Hallmark to the factory there at Emporia, while he attended school. Russell graduated from Emporia State in 1952 and got a job with an accounting firm in McPherson, so they moved there. Velvia worked at JCPenney’s in McPherson until she had her first child.

Craig Cornell was born in 1954 in McPherson. The surprise of twins came in 1957 with the birth of Coleen Kay and Joleen Rae. Coleen died three days later. Velvia kept busy as a homemaker, wife, and mother to her young family. She taught Sunday school and was a Cub Scout leader, Bluebird leader, and 4-H project leader. Her fourth child, Amy Leigh, was born in 1968 and died three weeks later.

Velvia worked at A&W drive-in before becoming a lunch room server and cashier for 25 years at McPherson Junior High and High School from which she retired.

She was a member of the Futurama Study Club, the Mary Martha Circle, and the McPherson First United Methodist Church.

One of the joys of her life was the birth of her long awaited grandson, Russell, in 1992.

She loved cooking and was an expert seamstress, making most of her own clothes and her daughter Joleen’s as a child. She also enjoyed walking Joleen’s dogs.

She is preceded in death by her parents; husband; her daughters, Coleen and Amy; brothers, Gilbert and Dorwin Jackson; and sisters, Verlin Frame, Marybelle Pruitt, and Joan C. Stewart.

Visitation will be held from 3:00 PM to 7:00 PM, Friday, July 28, 2017, at Stockham Family Funeral Home with the family receiving friends from 6:00 PM to 7:00 PM. The funeral service will be held at 10:00 AM, Saturday, July 29, at First United Methodist Church with Rev. Karen Rice Ratzlaff officiating. Burial will follow at McPherson Cemetery.

In lieu of flowers, memorial donations may be given to First United Methodist Church in care of Stockham Family Funeral Home, 205 North Chestnut, McPherson, KS 67460. To send flowers or a memorial gift to the family of Velvia V. Pearman please visit our Sympathy Store.

To send flowers to the family in memory of Velvia V. Pearman, please visit our flower store.