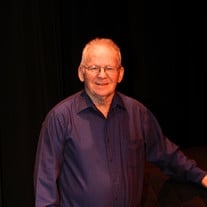 Thomas D. “Tom” Hodson, 84, of McPherson, passed away on Friday, September 4, 2015, at Heartland Haven, Inman. He was a retired middle school math and science teacher. He also managed the Emmanuel Pines Camp in Prescott, AZ. Tom served in the U.S. Marine Corps during the Korean War.

Tom was born on March 13, 1931, in Ericson, NE, the son of Ralph Leon and Flora Blanche (Bowley) Hodson. He graduated from Loup County High School (Nebraska) in 1949. He graduated from Central College in 1951 and Seattle Pacific University in 1953. On August 16, 1957, Tom was united in marriage to Barbara Jean Cartwright in Auburn, WA. She preceded him in death on October 20, 1998.

He was a member of the Free Methodist Church.

He was preceded in death by his parents, wife, and sister, Frances Tippery.

The funeral service will be at 11:00 AM, Friday, September 11, 2015, at McPherson Free Methodist Church with Rev. Tom Mayse and Dr. David Kessler officiating. Burial with Military Honors will follow at McPherson Cemetery. Visitation will be held from 3:00 PM to 7:00 PM, Thursday, at Stockham Family Funeral Home with family receiving friends from 5:00 PM to 7:00 PM.

Memorial donations may be given to Emmanuel Pines Camp (Prescott, AZ) or Central Christian College of Kansas Hodson-Bowley Scholarship Fund in care of Stockham Family Funeral Home, 205 North Chestnut, McPherson, KS 67460. To send flowers or a memorial gift to the family of Thomas D. Hodson please visit our Sympathy Store.

To send flowers to the family in memory of Thomas D. Hodson, please visit our flower store.