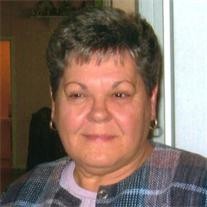 Thelma L. "Tim" Everhart, 73, of Canton, passed away on Saturday, July 20, 2013, surrounded by her family at her home. She was a retired Distribution Clerk for the Canton Post Office from 1969 to 2002. She also was Director of Senior Activities at Canton Senior Center from 1982 to 2002.

She was born on April 19, 1940, in Owensboro, KY, the daughter of Lee Roy and Ardena (Coin) Coombs. Tim graduated from McPherson High School in 1958. She also was in the second graduating class in Kansas to receive her EMT certification.

On June 24, 1961, Tim was united in marriage to Lawrence Dwight Everhart, in Canton, KS.

Tim was a member of the Mail Handlers Union, McPherson-Rice County Chapter of EMT's, American Legion Auxiliary for many years, and past member of Canton City Council, serving two terms. She also volunteered at Canton Ambulance Service, Friends of Canton, and Friends of Maxwell. She was also involved in several civic groups over the years.

She was preceded in death by her parents.

Memorial donations may be given to the Stars & Stripes Military Museum, Canton or Harry Hynes Memorial Hospice in care of Stockham Family Funeral Home, 205 North Chestnut, McPherson, KS 67460. To send flowers or a memorial gift to the family of Thelma "Tim" Everhart please visit our Sympathy Store.

To send flowers to the family in memory of Thelma "Tim" Everhart, please visit our flower store.
Send a Sympathy Card