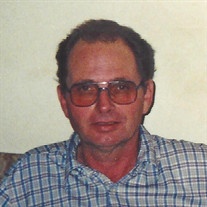 On September 3, 1961, Tex was united in marriage to Donna Grace Parr in McPherson, KS. They had two children, Tamie and Todd. She preceded him in death on July 31, 2011, after 49 years of marriage.

Tex lived in McPherson, working at Continental Aluminum, Vulcan Metals, and then retiring from Walmart. Shortly after getting married, he served for two years in U.S. Army as a communications specialist during the Vietnam War. Tex loved playing guitar, listening to music, fishing & camping, and spending time with his grandchildren.

He was preceded in death by his parents, brother, Kent, and wife, Donna.

The memorial service with Military Honors will be held at 10:00 AM, Tuesday, December 12, 2017, at Stockham Family Funeral Home.

Memorial donations may be given to Friendship Meals or Alzheimer’s Association in care of Stockham Family Funeral Home, 205 North Chestnut, McPherson, KS 67460. To send flowers or a memorial gift to the family of Tex L. Koehn please visit our Sympathy Store.

To send flowers to the family in memory of Tex L. Koehn, please visit our flower store.