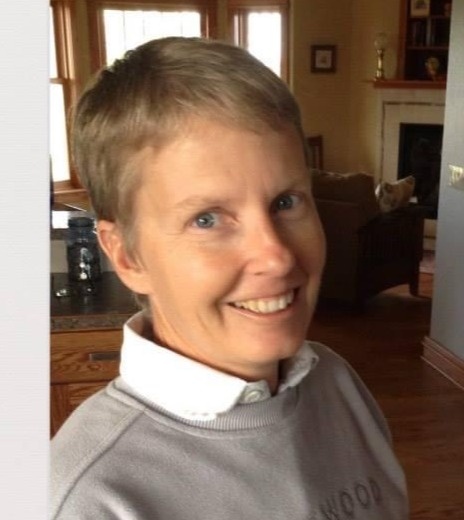 Susan (Sue) K McDonald, 60, of McPherson and formerly of Fargo, ND, passed away peacefully at home on April 12, 2022. Sue was a lifelong educator, most recently Professor Emeritus at Kansas Wesleyan University in Salina, Kansas.

Sue was born on March 9, 1962, in Berkeley, California, the daughter of Clarence E. and Lois (Kay) McDonald.  She graduated from Fargo North High School in 1980.  She received her Bachelor of Science degree in Mechanical Engineering from North Dakota State University in 1983, her Master of Science degree in Geology from Indiana State University in 1990 and Doctor of Philosophy in Physics at Indiana University in 1994.  On May 10, 1987, Sue was united in marriage to Dale Griffith in Fenton, Michigan.  They were married 34 years before Dale’s passing on February 5, 2022.

Sue and Dale’s marriage began in Kansas City and Washington DC, working as Mechanical Engineers for Babcock and Wilcox until Sue’s return to school to complete her master’s and doctoral studies.  Sue and Dale lived in Terre Haute, Indiana and Sioux City, Iowa while Sue completed her degrees, following which she began her academic career at Morningside University.  Sue and Dale then moved to Kansas to accept her professorship position at Kansas Wesleyan University in Salina, where she retired Emeritus in 2012.  Throughout the years, she shared her love of Earth Science as an instructor at the yearly summer field camp experience at Indiana University’s Judson Mead Geologic Field Station in Cardwell, Montana.  A residential facility was named in her honor at the Field Station in 2021.  Dr. McDonald loved working with her students and positively impacted the lives of many along the way.

Sue and Dale built a home outside of Lindsborg, KS and later in Marquette, KS.  During their time in Lindsborg, Dale and Sue participated in the Bike Across Kansas ride together, starting at the Colorado Border and ending in Kansas City eight days later.  Sue began running marathons with her good friend Julia.  They completed 4 half and 4 full marathons together including events in Abilene, KS, Wichita, KS, and Fargo, ND where Sue christened the team’s name “Not Fast, Not Last.”

Sue and Dale found Community in Marquette.  They found their fur-baby, Lucy, in the streets of Marquette and gave her a home.  Sue became a member of the Marquette United Methodist Church where she served as church Treasurer and provided Science enrichment activities for the children on Wednesday nights.  She was known to students in the area as “Science Sue.” She could often be found at the Motorcycle Museum in Marquette, giving tours, assisting with rallies, and chatting with visitors and friends in the community.

Sue was diagnosed with stage IV Stomach Cancer in December 2012.  In spring 2013, following initial treatments, she was flown by Angel Flight to MD Anderson, where her care team completed surgery to remove her stomach.  She endured chemotherapy, radiation, and a host of other ongoing medical procedures throughout the years but continued to fight with optimism and a smile on her face.  She met life-long friends throughout this journey.

Sue moved to McPherson in 2020 and adopted another fur-baby.  She rescued her dog Pumpkin and gave her a forever home.  Sue and Pumpkin made many new friends in her neighborhood at Veranda Place.  Sue enjoyed going for walks, playing cards, reading, painting, attending concerts and hanging out with friends and cousins, Michele and Kelli.  She also developed a friendship with a group that she called “Her Sista’s” Veletta, Cathy and Donna.

Dr. McDonald was preceded in death by her parents, Clarence and Lois, and her husband, Dale.

A Celebration of Life for both Sue and Dale will be held at 2pm Sunday, May 15, 2022, at Stockham Family Funeral Home, 205 N Chestnut St, McPherson KS with Rev. Lynn Scott officiating. A reception will be held following at the Veranda Clubhouse, 931 Veranda Circle, McPherson, KS.  To view a live stream broadcast of the service, please click on the following link: https://evt.live/susan-mcdonald-dale-griffith-memorial-service

In lieu of flowers, please consider a memorial in honor of Dr. Susan McDonald to Indiana University Judson Mead Geologic Field Station.  Checks can be made out and mailed to:  IU Foundation / PO Box 6460 / Indianapolis, IN 46206-6460 or in care of Stockham Family Funeral Home, 205 North Chestnut, McPherson, KS 67460. Please include in memo: Dr. McDonald, Judson Mead Field Station Fund.

We Love you, Sue.

“Goodbyes are not forever, are not the end; it simply means ‘I’ll miss you,’ until we meet again.” - Unknown

He was named after his dad's high school track coach, but Dale didn't like his name because Roy Roger's wife, Dale Evans, was well known in his elementary school years.  At a very young age, he loved to take things apart to see how they worked, like door knobs.

Dale graduated from Redford High School, Detroit, MI and went on to earn a degree in American History at Michigan State University. He, then, continued to University of Michigan for an engineering degree.

Sue and Dale were married in a park at Fenton, MI on a Mother's Day.  Dale’s family was so happy for both of them.

He was a very generous uncle to his nieces and nephews, Tom, Bob and Lisa Krause, and Craig, Jeff, and Kandace Bloomer. His family looked forward to the Christmas cards from Dale and Sue, because the letters Dale included always left them laughing.  At reunions, he never had too much to say if everyone was there. However, when the crowd was smaller, he was more comfortable.

Dale always asked his sister, Mary, what he could fix at her house as she lived alone.  She seemed to always have something that needed fixing!

He had a love for cats, working on clocks, and trying to get trees to grow in Kansas!

Dale has a younger brother, Richard, and an older sister, Mary Ellen.  Another sister, Barbara Jean, passed away in 2001.

To send flowers to the family in memory of Sue McDonald, please visit our flower store.