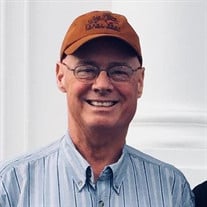 Steven Ray Jonas, 64, of Marion, KS and formerly of McPherson, KS, passed away peacefully on Wednesday, October 16, 2019, surrounded by family at Ascension Via Christi-St. Francis RMC, Wichita. In 2016, after 36 years, Steve retired from CHS Refinery, McPherson, where he worked in maintenance.

Steve was born on November 24, 1954, in McPherson, KS, the son of Clayton P. “Jody” and Virginia Lea “Dinny” (Wenger) Jonas. He graduated from McPherson High School in 1972. Steve was united in marriage to Carol Nadine Regier on September 4, 1976, in McPherson, KS.

He attended First United Methodist Church and was a member of Ducks Unlimited, Pheasants Forever, and National Rifle Association. He was also a member of National Sporting Clays Association where he won many awards in his class including a state championship.

He was preceded in death by his father, Clayton Jonas, and mother-in-law, LaVeda Regier.

A memorial service will be held at 10:30 AM, Saturday, October 26, 2019, at First United Methodist Church, McPherson, with Pastor Lacey Wheeler officiating.

In lieu of flowers, memorial donations may be given to St. Jude Children’s Research Hospital in care of Stockham Family Funeral Home, 205 North Chestnut, McPherson, KS 67460. To send flowers or a memorial gift to the family of Steven R. Jonas please visit our Sympathy Store.

To send flowers to the family in memory of Steven R. Jonas, please visit our flower store.
Send a Sympathy Card