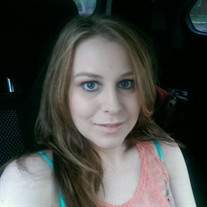 Stacie DeAnn (Wittig) Leach, 32, of McPherson, KS and formerly of Pratt, KS, passed away on Sunday, June 1, 2014, at the McPherson Hospital. She was a homemaker and former flight attendant.

Stacie was born on December 30, 1981, in Laurel, Mississippi. She attended McPherson High School and graduated from flight attendant school.

She was preceded in death by grandfather, Alton Hodge, and sister, Christina Sumrall.

The funeral service will be held at 2:00 PM, Friday, June 6, 2014, at First Baptist Church, McPherson with Rev. Terry Tareila officiating. Burial will follow at the McPherson Cemetery. Visitation will be held from 1:00 PM until service time on Friday at the church.

Memorial donations may be given to the Shoes & Coats for Kids Fund at the McPherson County Community Foundation in care of Stockham Family Funeral Home, 205 North Chestnut, McPherson, KS 67460. To send flowers or a memorial gift to the family of Stacie D. Leach please visit our Sympathy Store.

To send flowers to the family in memory of Stacie D. Leach, please visit our flower store.