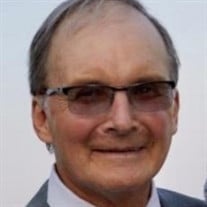 Ronald Earl Barnes, 72, of McPherson, KS and formerly of Colorado, passed away on Sunday, March 1, 2020, surrounded by family at his home in rural McPherson. He was a construction worker and a veteran of the U.S. Army, serving during the Vietnam War.

A memorial service will be held in Colorado at a later date. Memorial donations may be given to Serenity Hospice in care of Stockham Family Funeral Home, 205 N. Chestnut, McPherson, KS 67460. To send flowers or a memorial gift to the family of Ronald Earl Barnes please visit our Sympathy Store.

To send flowers to the family in memory of Ronald Earl Barnes, please visit our flower store.