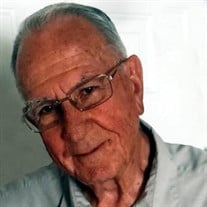 Ronald Keith Anderson was born on January 8, 1936, in McPherson, KS, the son of Leonard R. Anderson and Fern A. (Spencer) Anderson. Fern passed when Ron was ten years old. Leonard remarried Lena Marie Miller. Marie loved him like her own. He farmed in the summer for his uncle, Melvin Spencer, after his mother passed away. Farming made him strong with a strong grip that was part of his success later as a discus thrower. He loved farming.

Ron served with the Army National Guard, Company A, 137th Infantry from 1954 through 1962 when he was honorably discharged. He was a teacher, coach, and counselor in the Lawrence, Kansas area from 1957 through 1975. He moved back to McPherson when his father-in-law asked him to come help set up an oil company for him. He taught two years at Central Christian School in Hutchinson in the midst of helping start up many businesses, including Cap Oil, The Christian Counseling Center, and Economy Hearing Aid Center.

Ron graduated with the McPherson High Class of 1954. Until he was a freshman in high school, he had never thrown a discus. During those four years, he broke the school record nine times. He placed first in the league meets, first in regional meets, and first at KU Relay. He didn’t look like a discus thrower—he was 6 ft. 1 inch tall and entered high school at 140 pounds and weighed 157 pounds when he graduated. During high school, he also lettered in basketball and football.

On September 20, 1956, Ron was united in marriage to Patricia Helen Casebeer in Enid, OK.

He graduated with the McPherson College Class of 1958. Ron lettered in track and basketball. He was a three-time All American, four-time Discus NAIA Qualifier, KCAC Record holder, and two-year Conference champion. In 1957, he won the NAIA Discus National Championship. He was also an Olympic Trial Qualifier in the Discus. In 2000, he was inducted into the Athletic Hall of Fame.

He threw in Masters and Senior Olympic meets from 1992 to 2016. His last competition was when he was 80 years old. He competed in 205 meets, earned 175 gold metals, and held 80 meet records during that time. Their son, Rick, followed in his dad’s footsteps and took up throwing the discus and shot put also. He enjoyed many trips with Rick and his wife, Alice, when Rick became eligible to compete in the Masters and Senior Olympic meets. It gave Ron great joy when his son started beating his records!

He loved God, his wife Pat of 65 years, his family, and teaching others about our Lord and Savior. He had a special love for teaching Prophecy. He loved to take his children and grandchildren fishing when he was younger. He enjoyed watching his son and grandchildren play sports. He had a silly sense of humor. He was called Papa and was greatly loved by all.

In Ron’s last days, he was ministered to by Serenity Hospice Care. They loved him, and he loved them. They made his last days as pleasant as possible under the circumstances. He also had family members, you know who you are, who helped when Hospice couldn’t be there.

Ron went to be with Jesus on Wednesday, October 13, 2021, surrounded by family at his home in McPherson. He was eighty-five.

The memorial service will be held at 10:00 AM, Thursday, October 28, 2021, at Stockham Family Funeral Home with Pastor Mark Hoover officiating. Burial with Military Honors will follow at McPherson Cemetery. To view a live stream broadcast of the service, please click on the following link: https://boxcast.tv/view/ronald-k-anderson-memorial-service-219176

Memorial donations may be given to NewSpring Church Bible Ministry in care of Stockham Family Funeral Home, 205 North Chestnut, McPherson, KS 67460. To send flowers or a memorial gift to the family of Ronald K. Anderson please visit our Sympathy Store.

To send flowers to the family in memory of Ronald K. Anderson, please visit our flower store.
Send a Sympathy Card