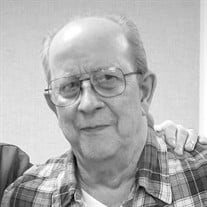 Roger F. Glaser, 73, of McPherson, KS and formerly of Phillipsburg, KS, passed away on Monday, June 12, 2017, at his home in McPherson. He had worked as an operator in the OIP Unit at the NCRA Refinery.

Roger was born on June 16, 1943, in Grayling, Michigan, the son of Leonard F. and Mary Elizabeth (Slack) Glaser.

He was preceded in death by his parents; son, Michael Glaser; brother, Steve Glaser; and grandson, Dylan Glaser.

No service is planned at this time. Memorial donations may be given to the Kansas State University’s Johnson Cancer Research Center in care of Stockham Family Funeral Home, 205 North Chestnut, McPherson, KS 67460. To send flowers or a memorial gift to the family of Roger F. Glaser please visit our Sympathy Store.

To send flowers to the family in memory of Roger F. Glaser, please visit our flower store.