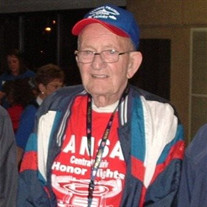 Robert Edgar Whelpley, 88, of McPherson, passed away peacefully on Tuesday, September 30, 2014, at Sterling House of McPherson. He was retired from the U.S. Department of Agriculture as a soil conservation service agent.

Robert was born on June 10, 1926, in Kansas City, MO, the son of Clarence Arthur and Elsie Ellen (Baker) Whelpley. He was a United States Navy Veteran of WWII, serving in the Pacific from 1944 to 1946. He graduated from Kansas State University in 1951.

Robert attended the McPherson Free Methodist Church and First United Methodist Church. He was a member of American Legion Post #24, the Sierra Club, and Good Sam Camping Club. He was active in Boy Scouts of America and had received the Silver Beaver Award.

He was preceded in death by his parents, wife, Mary, and two brothers, Donald and Glenn.

The memorial service will be at 2:00 PM, Monday, October 6, 2014, at McPherson Free Methodist Church with Rev. Tom Mayse officiating. Family will receive friends from 1:00 PM, Monday, until service time at the church. Inurnment with Military Honors will follow the service at the McPherson Cemetery.

In lieu of flowers, memorial donations may be given to MCDS or Alzheimer’s Assn. in care of Stockham Family Funeral Home, 205 North Chestnut, McPherson, KS 67460. To send flowers or a memorial gift to the family of Robert E. Whelpley please visit our Sympathy Store.

To send flowers to the family in memory of Robert E. Whelpley, please visit our flower store.