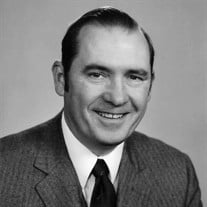 Robert (Bob) Glenn Hull passed away on Thursday, January 20, 2022, in Brookdale Assisted Living. At his side was his beloved wife of 70 years, Donna. Bob was born in Ottumwa, Iowa on September 14, 1929, to DeElda L. (Davidson) Hull and C. Glenn Hull. He graduated from Ottumwa High School in 1947 and attended Greenville College where he met and married the love of his life Donna Marie Hastriter on January 26, 1951. Their union was blessed with two children, Cynthia Ann and Steven Kent.

During the Korean War, Bob served four years in the United States Air Force. Following his military service, Bob graduated from Friends University with a degree in business and economics. Later, he completed a master’s degree in Business Administration at Emporia State University.

Employed by National Cooperative Refinery Association for 34 years, he served as Vice President – Finance and CFO until his retirement in 1991.

As a young child, Bob gave his heart to the Lord and rededicated his life to His service as an adult. A member of the Free Methodist Church, he served on the finance committee and was on the board and executive committee of Central Christian College for many years.

Bob and Donna got much pleasure out of their two grandsons, Sam Williams and Scott Williams, as well as his great-grandchildren, Conan, Max, Gavin and Makena.

Bob is survived by Donna, his wife of nearly 71 years, along with his sister, Rosemary Neathery of Highland, Illinois, two children, Steve (Andrea) of Hillsboro, Illinois and Cynthia Williams of Denver, Colorado, two grandsons, Sam (Brook) Williams and their children, Conan and Max of Denver, Colorado and Scott (Athena) Williams and their children, Gavin and Makena of Auburn, Washington, along with nieces, Karen (Dave) Fellows and Vicki (Bob) Vik.

A private family gathering will be held and the final resting place for Bob will be in McPherson, Kansas. His heart and soul are in heaven with Jesus.

Memorial donations may be given to Central Christian College of Kansas (McPherson) in care of Stockham Family Funeral Home, 205 N. Chestnut, McPherson, KS 67460.

To send flowers to the family in memory of Robert G. Hull, please visit our flower store.
Send a Sympathy Card