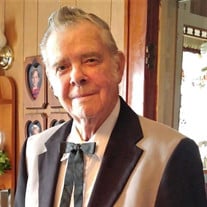 Robert “Bob” Louis Clark, 90, of McPherson, KS, passed away peacefully on Friday, December 24, 2021, at Stormont-Vail Hospital in Topeka, KS.  He was a retired truck driver for Cargill Nutrena Feeds.

Bob was born on October 21, 1931, in Richmond, KS, the son of Joseph Robert and Elva Birdean (Whipple) Clark.  On August 28, 1956, Bob was united in marriage to Bertha Joan McGinnis in Richmond.

Bob served in the Army National Guard and also in the United States Army during the Korean War.  He was a member of the American Legion Post #24 and V.F.W. Post #2715.  He was also a member of Grace Bible Church.

Survivors include: his loving wife of 65 years, Bertha of the home; two daughters, Tamera Alexander of Newton, KS and Coleen Haddox and husband, Michael, of South Coffeyville, OK; a sister, Martha Chambers of Osage City, KS; six grandchildren; and 13 great-grandchildren.

He was preceded in death by his parents and a brother, John Clark.

To send flowers to the family in memory of Robert L. Clark, please visit our flower store.
Send a Sympathy Card