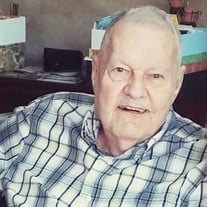 He was born on September 30, 1932 the only child of Albert “Lee” Leland and Rosaline (Knaak) Bacon in McPherson, KS. He grew up and attended schools in McPherson, graduating from McPherson High School in 1951. Robert served the United States Army during the Korean War from 1952-1954. He was stationed in Korea and Japan as a clerk in the medics. After returning home, he attended two and a half years at McPherson College and was owner/operator of McPherson Recreation Pool and Dominoes.

He retired from the State of Kansas as a weight officer and went on to drive a school bus and was security officer at Inland Container and Val-Agra. His hobbies were hunting, trap shooting, bowling, and playing snooker with his customized cue stick. He never knew a stranger. He loved giving people a hard time and joking. He was patient, loving, understanding, encouraging and the kindest soul. He loved God, his family and his beloved cats.

He was preceded in death by his parents and grandparents.

A graveside service, with military honors, will be held on Friday December 13, 2019, at 11:00 am at McPherson Cemetery, McPherson, KS.

Memorial donations may be given to the Robert Bacon memorial fund c/o Stockham Family Funeral Home, 205 N Chestnut St., McPherson, KS 67460. Donations can also be given for Arizona Navajo Mission trips and can be sent to thechurchtwinfalls@gmail.com through PayPal or mail checks to: The Church, 1708 Heyburn Ave E, Twin Falls, ID 83301. To send flowers or a memorial gift to the family of Robert L. Bacon please visit our Sympathy Store.

To send flowers to the family in memory of Robert L. Bacon, please visit our flower store.
Send a Sympathy Card