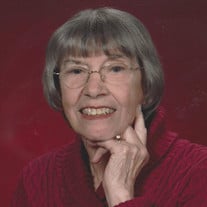 Rita Kathryn Perrin, 92, passed away peacefully on Saturday, September 10, 2016, surrounded by family at McPherson Hospital. She was a homemaker and had been a McPherson resident since 1957.

She was born March 2, 1924, at the family farm near Partridge, Kansas, the daughter of Benton R. and Madge A. (Goudy) Anderson. She attended the local schools and graduated from Partridge High School. She went on to graduate from Kansas State University in 1945 with a degree in home economics.

Rita was a member of First Presbyterian Church, McPherson where she served as a deacon. She was a founding member of P.E.O., Chapter HI, belonged to several bridge clubs, and enjoyed golf and tennis. She was an avid gardener, whose beautiful garden was once featured in the local garden tour. She was an enthusiastic and knowledgeable sports fan, supporting K-State, the Kansas City Royals and Chiefs, and the Oklahoma City Thunder.

She was preceded in death by her parents; husband; a sister, Jeanne Barnes, and two grandsons, Nicholas Mastrianni and Wade Bremyer.

A celebration of her life will be held at 11:00 AM, Saturday, September 17, 2016, in the backyard garden at the Perrin residence located at 1508 Heritage Place in McPherson. Rev. Dick Reynolds will officiate the service. In case of inclement weather, the service will be held at First Presbyterian Church, 1400 N. Main, McPherson. Private inurnment will be in McPherson Cemetery.

In lieu of flowers, memorial donations may be given to First Presbyterian Church or the Kansas State University Gardens in care of Stockham Family Funeral Home, 205 N. Chestnut, McPherson, KS 67460. To send flowers or a memorial gift to the family of Rita K. Perrin please visit our Sympathy Store.

To send flowers to the family in memory of Rita K. Perrin, please visit our flower store.
Send a Sympathy Card