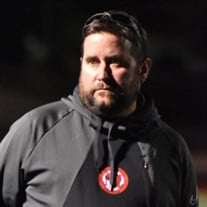 Reed Nelson Hardgrave was born on September 15, 1979, in Dallas, TX to Joe Dan and Julie Ann (Holsapple) Hardgrave. He graduated from Lake Highlands High School in 1998. Reed moved to McPherson, KS to attend and play soccer at McPherson College. His parents told him when he left for Kansas NOT to meet a girl, marry her and stay there. And that is exactly what he did! Reed and Sonya Renee Johnson were united in marriage on December 17, 2000. This union has blessed them with the biggest joys of their lives. Logan, Caden and Ellie were his everything.

Reed was undoubtedly a character and never met a stranger. He was authentic and what you saw is what you got. When you were with Reed, you always knew it was going to be a good time. His children's lives were filled with laughter - Reed loved BIG!! If he loved you, you knew it! They have walked through many trials and loss, but Reed always had a sarcastic remark or inappropriate joke to keep everyone laughing.

To put Reed’s character into words is almost like asking him to change his mind: it can’t happen. Reed was, honestly, hard to be around sometimes, but it was harder not to love him. He was cherished by all, and each person felt valued, even if he expressed it by making fun of you and calling you ridiculous names. Reed expressed his feelings through his actions, not his words. He expressed his love for his children by celebrating each Dallas Cowboys win (there weren’t many), playing soccer with them, and making them delicious food. But, like Reed, words are insufficient to describe a man that brought beautiful happiness to so many friends. However, three words come close: unapologetically himself and loved.

There are no words that would describe who Reed was. He was the best father, an amazing friend, and a loving, but stubborn husband. Everyone around him was blessed with the dad jokes he would tell. His cooking was something everyone looked forward to and thoroughly enjoyed. He was a hard worker and a very loyal person. He knew how to put a smile on people’s faces and touch people's hearts. Reed loved so many, and he showed it with his loving actions.

Reed was brilliant and had a photographic memory. He remembered every phone number of every family member and even had high school friends’ license plates memorized after 25 years. Reed also knew he was brilliant and made sure everyone around him knew it as well. Whether it be coining the nickname “Mr. Right” because he was always right or arguing with people over downright ridiculous things; He was confident to the point of cocky and loved to prove people wrong with a quick google search or example. He would often butt heads with family, friends, and sometimes even random strangers over correct terms, politics, and much more.

In addition to being a smart-ass, Reed loved cooking. Cooking was his love language and he was amazing at it. He often showed his love and devotion to his friends and family by cooking. Being a whiz in the kitchen, he could make anything from French Onion soup to a kick-ass brisket that got praise on Instagram from famous chefs (he was very proud of this). However, no matter what he was making, it was always filled with the same love and enthusiasm he had for his family, friends, and life.

Reed’s second family was his soccer family. This family stretches far and wide, and he loved each of these people wholeheartedly. He played soccer from the time he could walk, then through high school and for the McPherson College Bulldog Soccer team where he was an NAIA Academic All-American. Reed was active in the McPherson City FC, and was currently the assistant men’s soccer coach at McPherson College. He has been an integral part of the men’s and women’s soccer programs at MC for the past 20 years.

Reed started working on the plant floor at Ferguson Production while still attending McPherson College. Upon graduation, he was offered a job in the office as a cost analyst, and he worked his way up over the last 20 years to Vice President. Reed made numerous friends through the years and through golf tournaments, barbeque contests, travel, and quotes. And he loved all of the people that he met.

He was preceded in death by his father-in-law, Peter Johnson.

The family will receive friends from 5:00 PM to 7:00 PM, Wednesday, November 3, 2021, at McPherson Church of the Brethren. A Celebration of Life Service will be held at 10:00 AM, Thursday, November 4, at McPherson Church of the Brethren with Rev. Jerry Bowen officiating. Masks are required. Burial will follow at Lone Tree Cemetery, Galva. To view a live stream broadcast of the service, please click on the link below: https://livestream.com/mcpherson-college/reed-hardgrave

Memorial donations may be payable to Sonya Hardgrave for the benefit of the family and other community endeavors in care of Stockham Family Funeral Home, 205 North Chestnut, McPherson, KS 67460. To send flowers or a memorial gift to the family of Reed N. Hardgrave please visit our Sympathy Store.

To send flowers to the family in memory of Reed N. Hardgrave, please visit our flower store.
Send a Sympathy Card