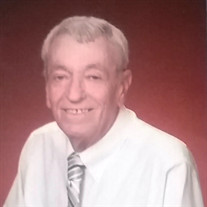 Ralph Nelson, Jr., 70, passed away Sunday, March 12, 2017, at his home in McPherson. He was a pipe fitter and had worked in industrial construction for many years.

During the Vietnam War, Ralph served his country in the U.S. Army and was awarded the Purple Heart.

He was preceded in death by his parents, first wife, and a sister, Mildred Chappell.

A memorial service will be held at 2:00 PM, Thursday, March 16, 2017, at First United Methodist Church, (McPherson) with Rev. Darren Frazier officiating. Inurnment, with military honors, will be in McPherson Cemetery.

Memorial donations may be given to McPherson Hospital in care of Stockham Family Funeral Home, 205 N. Chestnut, McPherson, KS 67460. To send flowers or a memorial gift to the family of Ralph Nelson Jr. please visit our Sympathy Store.

To send flowers to the family in memory of Ralph Nelson Jr., please visit our flower store.
Send a Sympathy Card