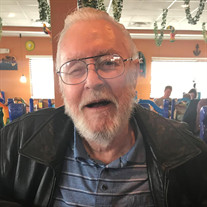 Harvey was born on September 25, 1941, in Hutchinson, KS, the son of Ralph Chase and Ellen Grace (Elliot) Russell. He graduated from Hutchinson High School in 1959 and Wichita State University in 1974. Harvey was united in marriage to Sandra Kay Simpson on July 21, 1979, in Haven, KS. She preceded him in death on June 3, 2011.

Harvey worked at KSIR/HCF in Hutchinson for 25 years. He served on many committees at KSIR/HCF, helping plan the annual fishing derby and chili cook off and served as the prison historian. Harvey enjoyed camping, fishing, gardening, baking, and playing cards, especially playing poker with friends. An avid collector, he collected antiques, coins, postcards, Native American artifacts, and fossils.

A kid at heart, Harvey especially enjoyed Christmas, Halloween, and 4th of July holidays and played Santa Claus for friends and family in McPherson and Hutchinson for many years. As a young man, he was involved with Boy Scouts and received the organization’s highest honor, Eagle Scout. He had a love for animals and fostered many animals for the Humane Society.

He was preceded in death by his parents, wife, and brother, Robert Russell.

Memorials are suggested to the McPherson County Humane Society in care of Stockham Family Funeral Home, 205 North Chestnut, McPherson, KS 67460. To send flowers or a memorial gift to the family of R. Harvey Russell please visit our Sympathy Store.

To send flowers to the family in memory of R. Harvey Russell, please visit our flower store.
Send a Sympathy Card