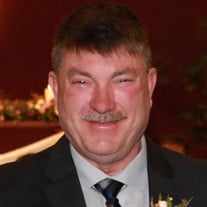 Philip Todd Nelson, 59, of rural Windom, Kansas, passed away peacefully on Tuesday, January 4, 2022, on the farm with his wife, Susan, by his side.  He was a farmer, and he and his wife owned and operated Nelson Ag Seeds.

On April 20, 1991, Philip married Jalane Marie Merrill at the Andover Lutheran Church, Windom.  This union was blessed with three sons, Justin, Jonah, and Jacob.  Jalane preceded Philip in death on May 28, 2010.

Upon graduation from high school, Philip bought a grain truck and went to work hauling grain to the Port of Catoosa in Tulsa, Oklahoma. It wasn’t long into this entrepreneurial adventure that he realized he couldn’t make a living hauling grain, founded Nelson Tank Service and went to work in the oil field. Later, Philip began farming full time at age 40.

Philip’s life was enriched with the birth of each of his three sons! He loved them deeply and was passionate in sharing his love for the farm and nature with them as well as following their many school and extracurricular activities.

After several years of singleness, Philip met Susan through a mutual friend who would work for two years trying to get both of them convinced that they needed to consent to a “blind date.” In August of 2014 this date finally took place and as they say, “The rest is history!” Upon his remarriage, he gained more children and later would often comment that his family circle enlarged in delightful ways he had never imagined.

Philip and Susan found that their humor, alongside their faith in Jesus Christ, would be what they needed to carry them through the many hard times that were on the horizon. Which, much to their surprise would include a diagnosis of prostate cancer just twenty short days after they said, “I do.”

In the summer of 2017, Philip and his wife were approached by a Kansas seed company and presented with the opportunity to start their own agricultural seed dealership. After much prayer and discussion, they made the decision to launch their business venture, Nelson Ag Seeds. Philip loved the seed business as much as he loved farming. His seed customers really weren’t “customers” to him, but truly his friends! It was important to Philip that he helped customers select products that made them successful in their farming endeavors.


Philip’s cancer would remain relentless over the course of 7 years but as a couple, they stood tightly together, taking on each new step of the illness as it unfolded. Susan was proud of her husband in the way he continued to live, and love and work; he refused to let cancer steal his joy and zest for life, even though he knew early on that his illness would never be cured. Oftentimes Philip would say, "I have cancer but cancer doesn't have me!"

The fear of facing one’s mortality was turned to sweetness as witnessed through the transformation Philip would undergo, as his faith grew stronger and stronger and his days grew shorter and shorter. Philip did some of his hardest and best personal work in his final days, growing closer and closer to his Savior, ultimately realizing and embracing his Savior’s unconditional love for him! Philip would openly tell anyone that he came to terms with the fact he had lived most of his life with “religion” rather than an authentic relationship with his Savior.

This past fall, the workload of harvest, planting, and caring for ag seed customers was a daunting task with the extent of the disease that was burdening his body. Yet, Philip in his true farm boy fashion kept pushing through the grueling workload and accomplished the tasks set before him. Philip remained committed, literally working in the field and filling his seed customers’ orders with help of his wife, children, two volunteers from the organization, “Farm Rescue,” and some Mennonite friends who lovingly helped Philip finish his final farming season strong!

As with farming, Philip and Susan would work their seed business side by side until Philip’s passing. They were a true partnership in business and in life and loved being together! One of their favorite activities was “putting” along on the back roads in their Jeep together just taking in the views.

Philip loved his family, seed customers, and community; he extended a helping hand to anyone in need, served on the local school board, as well as 40 years as a volunteer firefighter.

He was a mover and a shaker, entrepreneurial in spirit, and beyond talented and skilled with his hands; there was nothing he couldn’t design, build, or fix! He had a gregarious spirit, was ornery to his core, and his smile couldn’t be contained to just his lips but instead radiated across his entire face. Susan said it best when she stated: “I was always enamored with the way his eyes “spoke” when he smiled.” He was smitten with his five grandchildren; the joy they brought to him was evident!

Though there were many dangers, toils, and snares along his earthly journey, Philip finished his race strong and the enemy did not overtake him! The Lord lovingly fulfilled his promises to Philip, “…bestowing a crown of beauty instead of ashes, the oil of joy instead of mourning, and a garment of praise instead of a spirit of despair.” Isaiah 61:3

His father and first wife preceded him in death.

To send flowers to the family in memory of Philip Todd Nelson, please visit our flower store.
Send a Sympathy Card