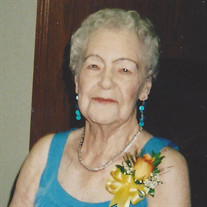 Pauline F. (Burch) Power was born September 4, 1909, in Roxbury, Kansas, the daughter of Jerome and Nettie Jane (Nichols) Burch. She died on Monday, April 24, 2017, at the age of 107 years, seven months, and 20 days. She had been living with her oldest daughter, Helen, for the last three and a half years.

Pauline married Clyde F. Power on April 10, 1929, in Roxbury, KS. They had five children; Harold, Helen, Peggy, Pasty, and Clinton. Pauline was a farmer’s wife for 25 years. She was the best cook in McPherson County, and a delight to be around.

Clyde died in an oilfield accident in February of 1954. Pauline then married Lawrence “Larry” Heim in June of 1956, and they lived in Canton, KS. Larry preceded her in death in 1990. Pauline lived at the Sterling House in McPherson before failing health made it necessary for her to move to Arizona to live with her oldest daughter.

Visitation will be from 10:00 AM to Noon on Thursday, May 4, at Stockham Family Funeral Home. Graveside service will be held at 2:00 PM Thursday, at the Valley View Cemetery in Roxbury. Memorial donation may be given to the American Cancer Society in care of Stockham Family Funeral Home, 205 N. Chestnut, McPherson, KS 67460. To send flowers or a memorial gift to the family of Pauline F. Power please visit our Sympathy Store.

To send flowers to the family in memory of Pauline F. Power, please visit our flower store.
Send a Sympathy Card