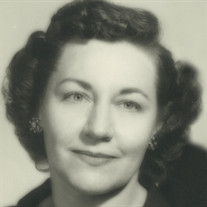 Pauline L. Anderson departed her earthly home for her new life in heaven on August 27, 2017, in Granbury, Texas. She was ninety-six.

Pauline was born in Coffeyville, Kansas on June 21, 1921. As a child during the Great Depression, a young woman raising a family during World War II, and a witness to many of America’s greatest accomplishments, including watching the first man walk on the moon, Pauline’s life was well lived. Pauline was a fiercely independent woman with a strong work ethic, and an undeniable love for Christ and her family.

Pauline was preceded in death by: her husband, Marvin Edward "Andy" Anderson; her parents, James and Essie Ford; and her brother, Edward Ford.

She is survived by: her daughter and son-in-law, Janet and James Higgins; her son and daughter-in-law, Dennis and Connie Anderson; and her brother, Ralph Ford. Pauline is also survived by eleven grandchildren and thirty-six great-grandchildren.

To send flowers to the family in memory of Pauline L. Anderson, please visit our flower store.
Send a Sympathy Card