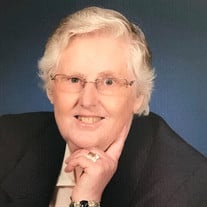 Paulette N. Rump, 85, of Inman, KS and formerly of Canton, KS and McPherson, KS, passed away peacefully on Sunday, February 3, 2019, surrounded by family at Pleasant View Home, Inman. She taught French at Fort Hays State University and was a secretary to the Boy Scouts of American in Salina, KS and at Farmers Alliance Insurance Co. in McPherson, KS. She was also co-manager at Super 8 Motel in McPherson.

Paulette was born on March 8, 1933, in Triacourt, France, the daughter of Louis Jules and Marie Claire (Tamagni) Margot. She married Donald Delaney in France. On July 15, 1972, Paulette was united in marriage to Robert “Bob” A. Rump at the First Christian Church in McPherson, KS.

She was a member of Kingdom Life Ministries in Hesston, KS.

She was preceded in death by: her parents; grandson, Robert Pearce; great-granddaughter, Gracie Detmer; and three sisters, Jane, Marie, & Odette.

Memorial donations may be given to Pleasant View Home Plaza in care of Stockham Family Funeral Home, 205 North Chestnut, McPherson, KS 67460. To send flowers or a memorial gift to the family of Paulette N. Rump please visit our Sympathy Store.

To send flowers to the family in memory of Paulette N. Rump, please visit our flower store.