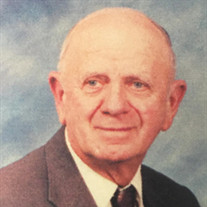 At the age of six, Paul contracted dust pneumonia and had a long recovery as Penicillin was not available. The result being he had to start school a year late. He graduated from the eighth grade at Groveland School in Groveland, KS and from McPherson High School in 1947. Paul was chosen to be a member of the National Honors Society of secondary schools. As a young man, he was baptized in the First Christian Church in McPherson.

Paul was 17 years old when his family moved to his mother’s family farmstead, and he resided there for the remainder of his life, except for the past few months when declining health made it necessary for him to move to a nursing home.

From 1953 to 1955, Paul served in the U.S Army as a radio operator in Korea, attaining the rank of Corporal.

Paul enjoyed roller skating and met his future wife, Sonja K. Mark, at Peterson’s Roller Rink in McPherson. Paul and Sonja were united in marriage on July 13, 1958, at the First Congregational Church in McPherson by Rev. Alfred Bartter. After the wedding, they went on a honeymoon trip to San Francisco, CA.

A lifelong farmer and rancher, Paul grew crops of wheat and milo and also raised cattle, hogs, and chickens. Paul and his father used to harvest wheat with a pull-type Baldwin combine, which is now at the Inman Museum. They later enjoyed the convenience of a self-propelled combine.

Paul will be remembered as a loving husband, son, father, and grandfather.

A private family memorial service will be held at a later date. Burial will be in McPherson Cemetery.

In lieu of flowers, memorial donations may be given to a charity of the donor’s choice in care of Stockham Family Funeral Home, 205 N. Chestnut, McPherson, KS 67460. To send flowers or a memorial gift to the family of Paul L. Smith please visit our Sympathy Store.

To send flowers to the family in memory of Paul L. Smith, please visit our flower store.
Send a Sympathy Card