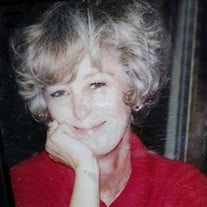 Pat was born January 6, 1937, in Coffeyville, Kansas to John D. (J.D.) and Dorothy (Cole) Martin. She attended Coffeyville schools and finalized her Associate of Arts Degree at Coffeyville Community College in 1976.

She was employed with First Federal Savings & Loan of Coffeyville for 15 years and various other temporary jobs until her retirement. She was a volunteer for the Genesis organization of Coffeyville.

Pat was baptized in the United Methodist Church.

She was a member of the Cherokee Nation and had traced her lineage back to Nancy Ward, the Ghigau. She enjoyed genealogy, painting, flower gardening, bird watching, and fishing.

She was preceded in death by: her parents; husband; and an infant son, Jeffrey Martin Stoneking.

Cremation has taken place, and a memorial service will be held at 2:00 PM, Friday, August 25, 2017, at Ford-Wulf-Bruns Chapel in Coffeyville. Rev. James Martin will officiate the service. Inurnment will follow at the Fairview Cemetery, Coffeyville.

In lieu of flowers, the family prefers that memorial donations be given to Genesis Food Pantry (Coffeyville) in care of Ford-Wulf-Bruns Chapel, 2405 Woodland, Coffeyville, KS 67337 or Stockham Family Funeral Home, 205 North Chestnut, McPherson, KS 67460. To send flowers or a memorial gift to the family of Patricia "Pat" Ann Stoneking please visit our Sympathy Store.

To send flowers to the family in memory of Patricia "Pat" Ann Stoneking, please visit our flower store.
Send a Sympathy Card