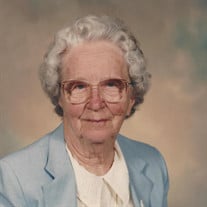 A memorial service will be held at 10:30 AM, Monday, January 22, 2018, at First United Methodist Church, McPherson with Rev. Darren Frazier officiating. The final resting place will be at McPherson Cemetery.

Memorial donations may be given to First United Methodist Church or Windom Senior Center in care of Stockham Family Funeral Home, 205 North Chestnut, McPherson, KS 67460. To send flowers or a memorial gift to the family of Olivia Olive Swift please visit our Sympathy Store.

To send flowers to the family in memory of Olivia Olive Swift, please visit our flower store.
Send a Sympathy Card