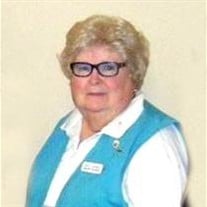 Nancy C. Janssen, 80, of McPherson, KS, passed away peacefully on Friday, January 10, 2020, at Pleasant View Home, Inman. She was a retired secretary for American Maplan.

Nancy was born on August 10, 1939, in McPherson, KS, the daughter of Orville Roy and Irene (Bair) Blair. She was united in marriage to William “Bill” Dean Janssen, and he preceded her in death in 1968.

She was a member of the American Legion Auxiliary and was Past Unit, District, and State President. She was also a member of Forty and Eight, Chapeau Passe, and ABATE of Kansas, District 9. Nancy had over 6000 volunteer hours with the McPherson Hospital Volunteer Services.

A Celebration of Life service will be held at 2:00 PM, Saturday, January 25, 2020, at Stockham Family Funeral Home with Chaplain Nick Miller officiating.

Memorial donations may be given to McPherson County Humane Society in care of Stockham Family Funeral Home, 205 North Chestnut, McPherson, KS 67460. To send flowers or a memorial gift to the family of Nancy C. Janssen please visit our Sympathy Store.

To send flowers to the family in memory of Nancy C. Janssen, please visit our flower store.
Send a Sympathy Card