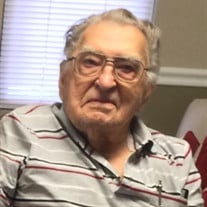 Murray L. Rodgers, 91 of McPherson, passed away peacefully on Monday, September 21, 2015, at Hutchinson Regional Medical Center. He was an oil field worker and was a security guard for National Cooperative Refinery Association.

Murray served in the U.S. Navy during WW II.

Murray was born on July 3, 1924, in Skiatook, OK, the son of Robert Leonard and Kathryn A. (Schafer) Rodgers. He attended Windom High School. On January 9, 1945, Murray was united in marriage to Rita E. Poe.

Memorial donations may be given to Grace Bible Church in care of Stockham Family Funeral Home, 205 North Chestnut, McPherson, KS 67460. To send flowers or a memorial gift to the family of Murray L. Rodgers please visit our Sympathy Store.

To send flowers to the family in memory of Murray L. Rodgers, please visit our flower store.