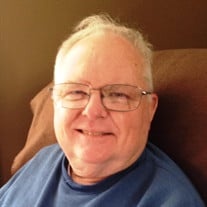 Michael Selman Connor, 70, of McPherson, KS and formerly of Jenks, OK, passed away on Wednesday, October 10, 2018, surrounded by family at his home in McPherson. He had most recently worked as a programmer for Helmerich & Payne in Tulsa, OK.

Michael was born on January 30, 1948, in Miami, FL, the son of Willy Selman and Agnes Elizabeth (Fuller) Connor. He graduated from North Miami (FL) High School in 1965 and Crown College in St. Bonifacius, MN. He served in the United States Army during the Vietnam War and was stationed in Germany. Michael was united in marriage to Janice M. Bloomquist on June 19, 1970, in Miramar, FL.

He was preceded in death by his father.

Memorial donations may be given to Arctic Barnabus Ministries for mission work in Alaska in care of Stockham Family Funeral Home, 205 North Chestnut, McPherson, KS 67460. To send flowers or a memorial gift to the family of Michael S. Connor please visit our Sympathy Store.

To send flowers to the family in memory of Michael S. Connor, please visit our flower store.