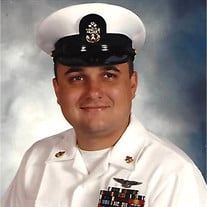 Michael Allen (Nichols) Boston, AWC USN, 56, of McPherson, KS, passed away peacefully on Thursday, February 7, 2019, at Harry Hynes Memorial Hospice in Wichita, KS. He was retired from the US Navy after serving his country for 23 years.

He was born January 5, 1963, the son of Max and Patricia Ann (Boston) Nichols in Oxnard, California, where he spent the first five years of life. He was the first of three children (two boys and one girl); Michael, Richard, and Michele.

Michael attended grade school and middle school in Phoenix, AZ and after moving to Kansas with his mother, brother, and sister, he graduated from Nickerson High School in 1980. He entered the US Navy shortly after graduation. He earned a degree from Southern Illinois University and a master’s degree in IT and in Business from Phoenix University. He believed in online education and was currently working toward a PhD in education administration from the American College of Education.

Michael was married to Bonnie Raetzke on October 14, 1989, while they were both stationed in Hawaii in the Navy. They have two children, Jennifer Lauren and Justin Michael, and two grandsons, Jason and Wesley Bobbio.

Michael’s Navy career included many deployments on several aircraft carriers including the Nimitz and the Eisenhower. Deployments took him to the Mediterranean, the Persian Gulf, the Philippines, Japan, the Aleutian Islands, and many other places around the world. It was truly “join the Navy and see the world.” He was part of the flight crew aboard P-3 Patron One reconnaissance aircraft dubbed the Screaming Eagles. He also flew 3rd seat in S-3 Viking aircraft, dubbed Screw Birds, for several years searching for submarines and tanks in Desert Shield operations. While on shore duty, he taught incoming sailors to do the job he had done while flying.

After retirement, the family lived in Charlottesville, VA. Following both grandfathers’ example, Michael built his own house. In Michael’s own “I’ll do it my way” mode, the home was built on what was deemed an unbuildable but scenic lot. It was a beautiful home in a beautiful setting.

In May of 2018, Michael moved to Madison, Wisconsin where he had taken a job with the Federal Aviation Administration as an MPA (Management & Project Assistant). He loved the excitement of working at the airport as it brought back memories of his flying days in Naval Air.

From his early years, Michael loved music. In high school, he was being taught to arrange and play both the guitar and drums. He loved the Beatles, Paul McCartney, and Van Halen among numerous others of many different types and time periods.

Michael was preceded in death by his father, Max.

Family will receive friends from 5:00 PM to 7:00 PM, Wednesday, February 13, 2019, at Stockham Family Funeral Home. The funeral service will be at 10:00 AM, Thursday, February 14, at Stockham Family Funeral Home with Rev. Lynn Scott officiating. The graveside service with Military Honors will be at 1:00 PM, Thursday, at Kansas Veterans Cemetery in Manhattan, KS.

In lieu of flowers, memorial donations may be given to Alcoholics Anonymous in care of Stockham Family Funeral Home, 205 North Chestnut, McPherson, KS 67460. To send flowers or a memorial gift to the family of Michael Allen Nichols Boston please visit our Sympathy Store.

To send flowers to the family in memory of Michael Allen Nichols Boston, please visit our flower store.
Send a Sympathy Card