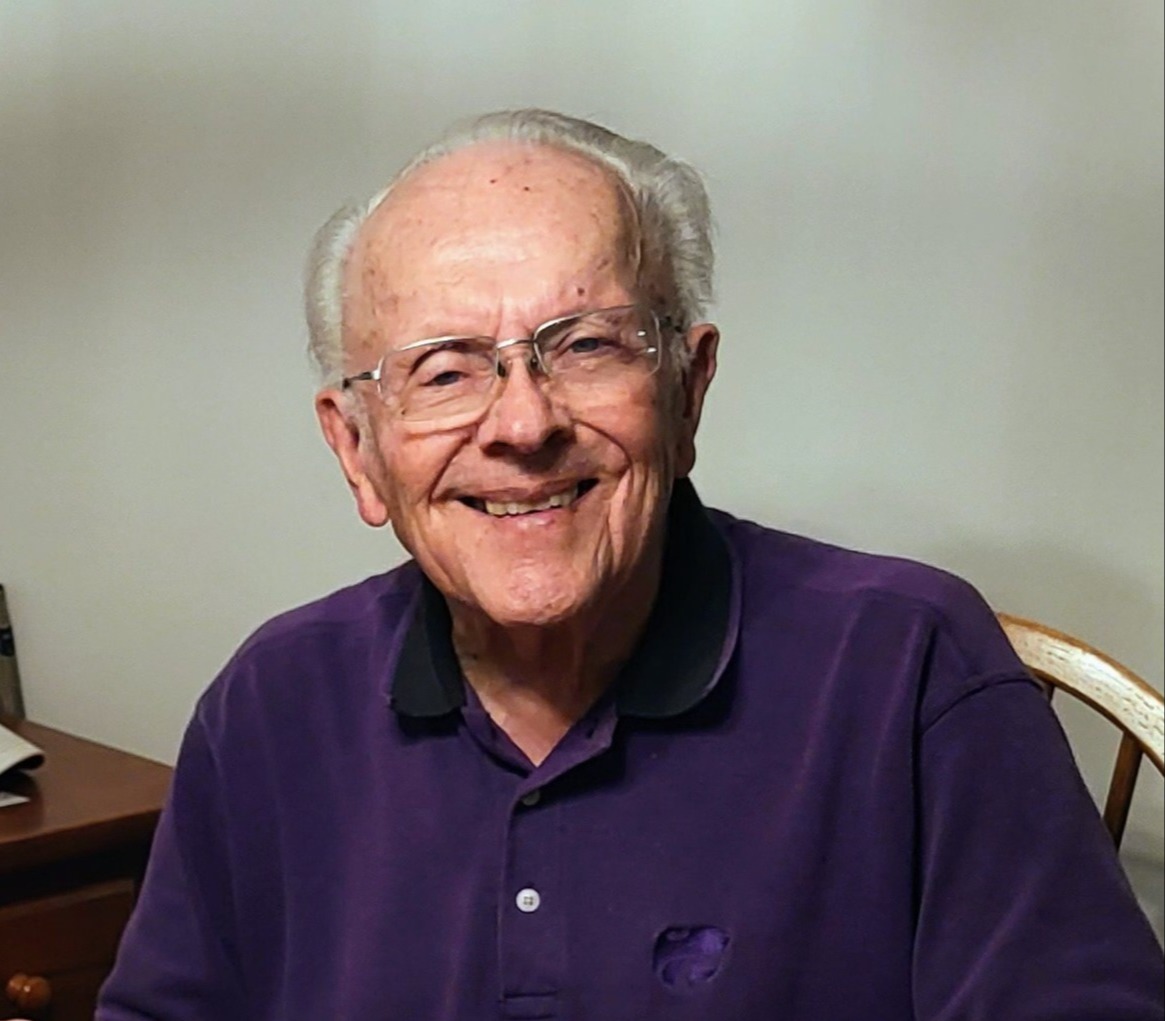 Merlin Jay Miller’s love for jigsaw puzzles was representative of his character. He was a patient optimist, a highly organized mind, a loyal partner, a fixer of things, a man of many talents who led a colorful life.

Merlin was born to parents Mary Fern Eby Miller and Edgar Jay Miller in Troy, Kansas, on September 10th, 1931. Edgar owned a grocery store nearby in Axtell, Kansas. Merlin was the middle child in his family, born two years after Letha and 15 years before Patricia. The family moved to Marshalltown, Iowa, in 1939, where Merlin had most of his growing-up years. He became a high school graduate in 1950, then attended McPherson College.

On the day Merlin’s father passed away in 1952, he also received his draft notice. Merlin left McPherson College and returned to Marshalltown to complete his father’s painting contracts. In 1953, he was working for Coca-Cola while dating Delma Joan Cline. Unfortunately, Coca-Cola would not give him two weeks off to travel to Kansas and get married, so he quit his job. The couple was married on August 28th, 1953, and Delma moved to Merlin’s home in Marshalltown, Iowa.

Merlin joined the Army and moved with Delma to Fort Chaffee, Arkansas, where their first daughter, Cheri Lynn, was born a year later. He served in the Army for two years. Merlin then moved with his family to McPherson, Kansas, which would be his home for the next 65 years.

Merlin and Delma had their second child, Diane Kay, in 1959. Their third child, Kevin Jay, was born in 1963. In McPherson, Merlin first worked for Modern Insulating Company, then transitioned in 1960 to the NCRA, where he would work for the next 33.5 years until his retirement in 1993.

Merlin was a dedicated father. He and Delma supported their children through a myriad of community involvements. The family faithfully attended Monitor Church of the Brethren. Cheri, Diane, and Kevin remember their dad leading the 4-H club, coaching softball teams, playing tennis, and even slalom water skiing one-handed (while smoothing his hair with the other hand)! Fond childhood memories include family vacations with their camper and boat, drinking root beer floats on summer nights, and spending Sunday afternoons at the Cline farm after church. On February 27th, 1989, Merlin lost his wife to breast cancer. Merlin and Delma were married 35 years.

On January 20th, 1990, Merlin married Reta Raleigh Hoch Gubser. Merlin and Reta were active members of the First Baptist Church. While he was married to Reta, Merlin began playing golf, woodworking, and rock hunting. The couple enjoyed many excursions collecting gems and geodes that Merlin later cut and polished in his shop. One of his proudest accomplishments was the 20x20 wood shop he built in their backyard (with no prior carpentry experience). He dug the footing, bought the lumber, did the framing, insulating, wiring, sheet rocking, painting, and roofing all on his own! On March 1st, 2004, Merlin lost his second wife to multiple myeloma. Merlin and Reta were married 14 years.

On August 17th, 2008, Merlin married Jody Clinesmith Dombaugh. They were active members of the First United Methodist Church. While he was married to Jody, Merlin became a dog-lover and learned to play Bridge. The couple enjoyed attending McPherson College ballgames and theatre performances together, and were loyal volunteers for Meals on Wheels and the Community Thanksgiving Dinner. Though he had already suffered more than his share of grief, Merlin lost his third wife on October 23rd, 2021. Merlin and Jody were married 13 years.

In his last year of life, despite a relapse of bladder cancer, Merlin spent his time playing golf, winning cornhole tournaments, playing pool with friends, exercising at The Cedars’ fitness center, and doing jigsaw puzzles with his family. Merlin passed away on October 13th, 2022, with his family near him.

Merlin is survived by his children and their spouses: Cheri and Neal Hudson, Diane and Jim Patton, Kevin Miller and Herb Acevedo; his stepchildren and their spouses: Wyatt and Mary Ann Hoch, Keith and Gail Hoch, Brenda and Jay Bohnenblust, Dalyn and Mark Cantrell; his sister, Patricia, and her husband Lowell Yoder, and a brother-in-law, Glenn Gayer. Merlin is also survived by 15 grandchildren: Colby, Riley, Cara, Adele, Logan, Erin, Lauren, Braden, Kaelin, Ashley, Whitney, Heidi, Katelyn, Casey, Cristen; and nine great-grandchildren. Merlin was well-loved! He is now reunited with his three wonderful wives, and we hope for his sake it isn’t awkward.

The family will receive friends from 3:00pm to 5:00 pm, Sunday, November 20th, 2022, at Stockham Family Funeral Home.  The celebration of life for Merlin Jay Miller will be held at the First United Methodist Church on November 21st, at 10:00am. To view a live stream broadcast of the service, please click on the following link: https://www.youtube.com/channel/UC5cflDseXQI-X9a0PFSMh0Q/videos

To send flowers to the family in memory of Merlin J. Miller, please visit our flower store.
Memorial Folder
Open