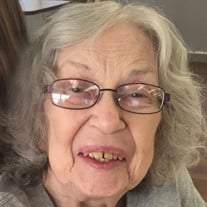 Mavis L. Wendlandt Jennings, 75, of McPherson, passed away peacefully on Friday, July 17, 2015, after a lengthy illness at McPherson Health and Rehab. She worked at The Cedars in the housekeeping and laundry department. She also co-owned & operated a cab company and bus depot in Herington, KS.

Mavis was born on April 1, 1940, in Ellsworth, KS, the daughter of Walter and Grace G. (Going) Juby. She graduated from Chase High School in 1957 and attended Hutchinson Community College. Mavis married Gary Bush in 1957. She married Robert Wendlandt in 1967 and after his passing, she married Kenny Jennings.

She was preceded in death by her parents, husbands, and siblings, Ethel Buller, Marie Clark, and Chester Short.

The funeral service will be held at 10:00 AM, Tuesday, July 21, 2015, at Stockham Family Funeral Home. Burial will follow at McPherson Cemetery.

Memorial donations may be given to McPherson County Humane Society in care of Stockham Family Funeral Home, 205 North Chestnut, McPherson, KS 67460. To send flowers or a memorial gift to the family of Mavis L. Wendlandt Jennings please visit our Sympathy Store.

To send flowers to the family in memory of Mavis L. Wendlandt Jennings, please visit our flower store.