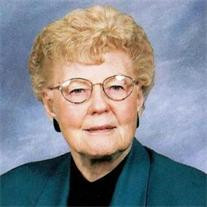 Mary Elizabeth (Spessard) Workman, 93, of McPherson passed away Saturday, September 14, 2013, at The Cedars Health Care Center in McPherson. She was born July 18, 1920, near Nickerson, Kansas, the daughter of Keller and Agnes (Slifer) Spessard.

Mary Spessard Workman's lifetime of service to others is a matter of record. Few persons have given of themselves as she has. In 1943, she taught three years of high school near Ottawa and one year of junior high school in Ottawa and later eight years in McPherson. In 1955, she was invited by her church denomination to serve as Director of Children's Work, an assignment she capably fulfilled until her marriage at McPherson in 1963 to Ronald Workman of Goshen, Indiana. She continued to serve the church at the local, district, and national levels. In the Goshen congregation, she served as chair of Christian Education Commission and coordinated, together with Ron, the college-age program. For the district, she was a co-leader of Mission Twelve.

She and her husband were among the early leaders in the International Christian Youth Exchange program, serving for eight years as Regional Representatives. They also were a host family for three exchange students from Finland, Japan, and Germany.

She was one of five who pioneered the establishment of the Oaklawn Psychiatric Center Auxiliary, serving as its president for the first two years. During this period, Mary and Ron's home was a "community home" for the Oaklawn patients.

Her work with the blind and their rehabilitation goes beyond words to describe. She and Ron presented over 500 "Blind Programs" to churches, schools, and civic groups in Indiana and surrounding states.

In 1968, she began employment with the Elkhart Rehabilitation Center, becoming the founder of Services for the Visually Impaired in the capacity as Director of Services. Her effectiveness has been attested to by many persons who have had the opportunity of being trained by her and her staff. Her work with these people has given them, as well as their families, a new hope for a productive life despite their handicap. She contributed in this work beyond the confines of her ten-county responsibility.

Her abilities and service didn't go unnoticed. In 1972, she was named 'Woman of the Year" by the Goshen Business and Professional Women's Organization. In 1980, Beta Sigma Phi gave her their "First Lady of the Year" award. Her Alma Mater, McPherson College, early recognized her service and abilities and in 1970, gave her their "Alumni Citation of Merit" award for outstanding public service.

In 1985, during Ron's illness, she was introduced to Hospice and in the following years, provided Hospice leadership in Goshen/Elkhart and McPherson. Ron passed away on May 7, 1985.

She was preceded in death by her parents, her husband, a brother, Lloyd Spessard, and a sister, Edna Spessard.

The funeral service will be at 2:00 PM, Friday, September 20, at McPherson Church of the Brethren with Rev. Chris Whitacre officiating. Burial will be in McPherson Cemetery. Visitation will take place from 3:00 to 7:00 PM Thursday, September 19, at Stockham Family Funeral Home.

Memorial donations may be given to the McPherson Church of the Brethren in care of Stockham Family Funeral Home, 205 N. Chestnut, McPherson, KS 67460. To send flowers or a memorial gift to the family of Mary (Spessard) Workman please visit our Sympathy Store.

To send flowers to the family in memory of Mary (Spessard) Workman, please visit our flower store.
Send a Sympathy Card