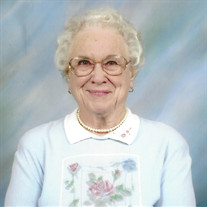 Kathryn Kittell, age 96, of Little River, Kansas, passed away on Monday, September 26, 2016, at Sandstone Heights Nursing Home in Little River. She was born on January 13, 1920, to Jesse Snyder and Mae Alene (Tinnen) Wile, in Ravanna, Missouri. Kathryn lived and attended school in Windom, Kansas, graduating in 1937. She married Howard H. Kittell on January 6, 1943, and they raised two children.

Kathryn was a loving wife and mother, a gifted seamstress, and accomplished artist. She was a 50 year member of the McPherson Eastern Star Chapter and a member of the First Congregational Church. She was one of the kindest people you could know, making friends with everyone she met.

Kathryn and Howard retired in 1983 and spent several years traveling throughout the United States and Canada before settling in Weslaco, Texas. Kathryn remained in the Rio Grande Valley after Howard's passing in 2001 until 2014, when she returned to Kansas.

Kathryn was preceded in death by her husband; two grandsons; her sisters, Marie Johnson, Juanita Wright, and Betty Lou Lindholm; and her two brothers, Billy Bob and Philip. She is survived by a son, Howard (Kit) Kittell and his wife, Theresa of Montrose, Colorado; a daughter, Kay Bechtel and her husband, Ken, of Overland Park, Kansas; six grandchildren; ten great-grandchildren; numerous nieces and nephews; and her dear friend and companion, Charlie Kriewald, of Little River, Kansas.

A graveside service and inurnment will be held at 10:30 AM, Friday, October 7, at McPherson Cemetery. Memorial donations may be given to Sandstone Heights Nursing Home or a charity of the donor’s choice in care of Stockham Family Funeral Home, 205 N. Chestnut, McPherson, KS 67460. To send flowers or a memorial gift to the family of Mary Kathryn Kittell please visit our Sympathy Store.

To send flowers to the family in memory of Mary Kathryn Kittell, please visit our flower store.
Send a Sympathy Card