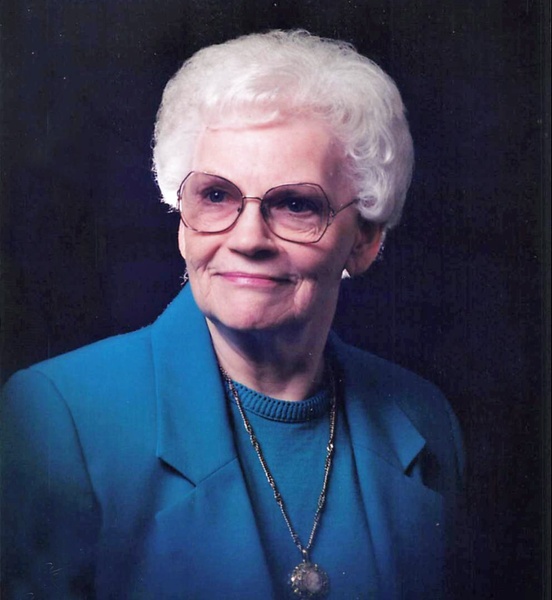 Mary Eunice Crown, daughter of Thomas L. and Martha E. (Cranford) Ensey, was born on May 5, 1923, in McKinney, Texas.  On June 20, 2022, with family members present, Mary died in McPherson, KS, passing from this earthly life to her longed-for home in heaven.

She graduated from Carmen High School in Carmen, OK as the 1941 class valedictorian.  She attended Central College and after graduating and spending her junior year at Greenville College in Greenville, IL, Central College offered her a bookkeeping job for the 1944-1945 school year.  After that, she attended Seattle Pacific College in Seattle, WA, and graduated with a bachelor’s degree in Business in 1946.

Mary then returned to McPherson which remained her home for the rest of her life.  From 1946 to 1949, she taught in Central’s business department and during these years, she met her life partner, Milan Wesley Crown, and they were married in 1949.

After taking a break from teaching to raise their three sons, she took the secretary job to the academic dean at Central College and eventually became the college registrar from which position she retired in 1989.

Milan’s sudden death in 1973 shocked Mary and her sons.  Mary’s faith that God would walk beside her family through the valley of death never wavered.  She faithfully attended the Free Methodist Church for as long as she was able.

Mary took up quilting and produced three beautiful quilts that her sons and spouses received on their wedding day, but she didn’t stop with her sons.  Many lucky folks received the blessings of one of Mary’s quilted wall hangings.

The funeral service will be held at 10:00 AM, Saturday, June 25, 2022, at Stockham Family Funeral Home with Rev. Tom Griffith officiating.  The family will receive friends from 9:00 AM until service time on Saturday at the funeral home. Burial will follow the service at McPherson Cemetery.  To view a live stream broadcast of the service, please click on the following link: https://evt.live/funeral-service-for-mary-eunice-crown

Memorial donations may be given to Central Christian College in care of Stockham Family Funeral Home, 205 North Chestnut, McPherson, KS 67460.

To send flowers to the family in memory of Mary Eunice Crown, please visit our flower store.
Memorial Folder
Open