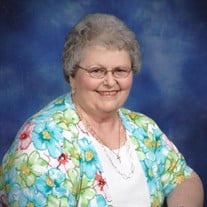 Marilyn K. (Plouffe) Bailey, 75, of McPherson and formerly of Canton, passed away peacefully on Monday, November 14, 2016, surrounded by family at Parkside Homes in Hillsboro, KS. She worked many years as a bank teller at the State Bank of Canton.

Marilyn was born on February 16, 1941, in Hutchinson, KS, the daughter of H.J. (Jerry) and Hallie (Smith) Plouffe. She attended Canton schools and went to Emporia State Teachers College. In 1960, Marilyn married Alvin E. Tinsley and they were blessed with three daughters. On November 28, 1983, she was united in holy matrimony to Douglas E. Bailey in Canton, KS.

Marilyn enjoyed sewing, crafts, camping, photography, her dogs, painting, and all of the colors of God’s green Earth and the ever changing beauty of His skies. Marilyn had a good life and had a faith in a better life hereafter.

She was preceded in death by her parents and granddaughter, Jessa Nicole Cavanaugh.

Memorial donations may be given to Parkside Homes in Hillsboro, KS or Good Shepherd Hospice in care of Stockham Family Funeral Home, 205 North Chestnut, McPherson, KS 67460. To send flowers or a memorial gift to the family of Marilyn K. Bailey please visit our Sympathy Store.

To send flowers to the family in memory of Marilyn K. Bailey, please visit our flower store.