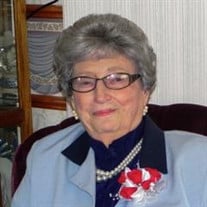 Malinda Mae (Strauss) Ensz Hassman, 92, of McPherson, died on Thursday, February 18, 2016, at The Cedars in McPherson, KS. She was born on October 19, 1923, in Paxton, NE, one of seven children born to John L. and Marie (Schroeder) Strauss. When Malinda was a child, the family moved to Kansas where they eventually settled in Buhler. She graduated from Buhler High School in 1942.

On July 17, 1943, she married Abe Ensz, who was later sent to Germany to fight in WWII. Abe was killed in the war on March 19, 1945, a silver star recipient, leaving behind his young wife and infant son of only eight months. Malinda went on to beautician school in Wichita, and was a hair stylist in Hutchinson for several years. She married Richard Hassman on July 24, 1949. Richard and Malinda made a living as custom harvesters from 1954 to 1979. They then owned and worked together at Hassman Oil Company for many years until Richard became ill.

In her younger days, Malinda enjoyed horseback riding and was an avid bowler. She especially enjoyed playing cards with her friends. Her favorite pastime was watching sports on TV, especially basketball.

Malinda was a longtime resident of McPherson and was a member of the Free Methodist Church. She was a charter member of The National WWII Museum.

Malinda was preceded in death by her parents, husbands, Abe and Richard, an infant sister, sisters, Leona and Edna, and brother, Arnie.

Memorial donations may be given to Central Christian College of Kansas Scholarship Fund or McPherson Free Methodist Church in care of Stockham Family Funeral Home, 205 North Chestnut, McPherson, KS 67460. To send flowers or a memorial gift to the family of Malinda M. Hassman please visit our Sympathy Store.

To send flowers to the family in memory of Malinda M. Hassman, please visit our flower store.
Send a Sympathy Card